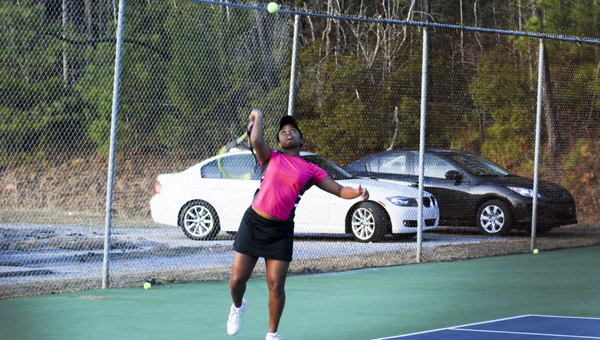 Ada Ruth Huntley of CCHS waits for the ball to come down prior to serving during a tennis match against Jemison’s Sarah Price on Monday. (Photo by Anthony Richards / Advertiser)

The ongoing rivalry continued between Jemison High School and CCHS continued on Monday, and did so on the tennis courts at Jemison City Park.

Eighteen matches took place on Monday with Chilton County winning the boys and girls portions of the event, by an overall score of 7-2 in both.

It would be a strange sight if Jemison High School and Chilton County did not meet on an athletic playing field.

“We play in every other sport,” Jemison head coach Jaime Mitchell said. “When the two schools play, it just seems right.”

According to Chilton County head coach Pamela Bearden, the warmer weather is a nice change of pace from the cold to near freezing conditions that a majority of early matches have been played under.

The familiarity between the programs makes for one of the more anticipated matchups on the schedule.

There was a unique level of respect that was shared by both players and fans from both sides.

“There’s more of a comradery on the court between the two schools compared to last year,” Bearden said.

The Panthers played in the Hillcrest High School Invitational in Tuscaloosa this past weekend, but have found it difficult to establish a normal routine.

According to Mitchell, it was only the third time that Jemison had been able to play this season, due to unfortunate weather circumstances throughout the early part of the season.

This has been a building year for Chilton County with certain segments of the team dealing with inexperience, Bearden said.

As a result, there was obvious learning that went on with each match that passed, and both coaches believed that there would be valuable moments to build on from Monday’s contests.

According to Mitchell, she has been proud of the leadership role that her upperclassmen have developed on the team. They have been receptive and a positive influence to the seventh graders.

“Days like this definitely help us to see what we need to work on,” Mitchell said.

Tolliver Gilliland of CCHS directs one of his 98 pitches thrown during a complete game victory at home against county... read more