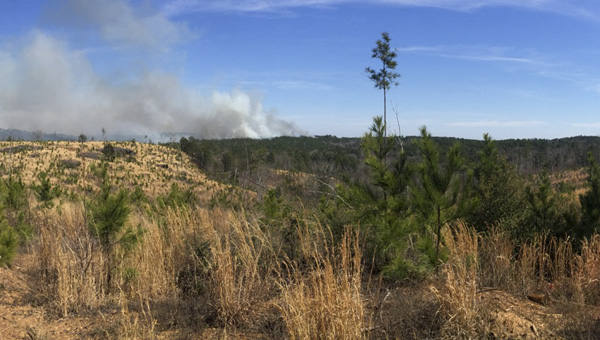 The Talladega National Forest, Oakmulgee District conducted a prescribed burn on Monday. The area of the burn was on Highway 183 in Chilton County, 4 miles southeast of Maplesville.

Ignition was scheduled for noon.

The smoke column was visible from U.S. 82, according to a release from the Talladega National Forest, Oakmulgee District.

The predicted transport winds were going to take the smoke north toward Randolph.

Later in the day, the smoke was expected to move toward Bessemer, but with the predicted transport winds and mixing heights there should be little discernable smoke, according to the release.

The smoke and fire behavior was monitored, and signs were placed on roadways, if needed, to alert travelers of smoke and burning operations, according to the release.

All of the prescribed burns have a detailed prescription covering a range of burning parameters including location of control lines and proper weather forecast.

“We use pinpoint weather forecast and computer modeling to help us determine downwind predictions of our smoke,” the release said. “We try to minimize smoke from our burns on the surrounding communities.”