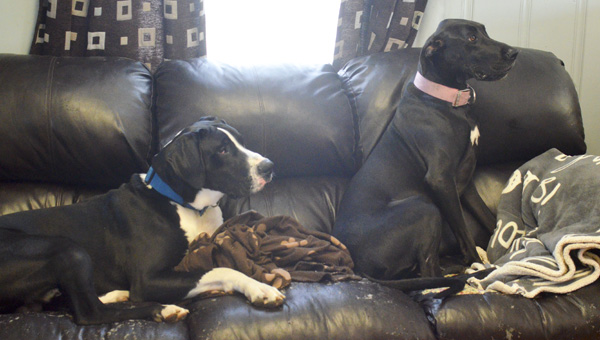 Great Danes Susie and Zeus were rescued by Kamp Krazy Bones Dog Grooming and Boarding after their owner was injured in a wreck on Interstate 65 in January.

After a wreck on Interstate 65 in January left an Orlando man seriously injured, the two Great Dane dogs he was traveling with brought the Chilton County community together.

“It really has been amazing to see how many people stepped up to help,” Kamp Krazy Bones Dog Grooming and Boarding owner Joseph Allgood said. “The situation could have been much worse, but everything has worked out and it was because so many people worked together.”

Allgood said he and his wife, Kristen Allgood, received word of a wreck on I-65 near the Peach Tower where a man was traveling from Orlando to Arkansas with his two Great Dane dogs, Susie and Zeus. 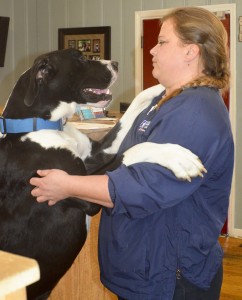 Zeus shows love to Michelle Glass who helped rescue him from the wreck.

“What we were told was the man’s truck flipped three times,” Allgood said. “The female dog escaped, but one of our clients brought us the male dog to take care of.”

The Allgoods started posting on social media about the incident and asked those in the community to be on the lookout for Susie, who was last seen near the peach water tower at I-65 Exit 212.

“We had a few people call and tell us they saw her around the interstate so we were worried she was going to get hit,” Joseph Allgood said. “We really tried to just get the word out for people to look out for her because we weren’t sure where she had gone.”

While the dog’s owner was being treated for his injuries at a hospital, Allgood said word quickly spread throughout Chilton County and surrounding areas with more than 4,000 people sharing Facebook posts about the missing female dog.

“After about 24 hours, we ended up finding Susie, who was near the rest area on the interstate,” Allgood said. “An ambulance EMT who was off duty ended up spotting her. She was very scared and the pads of her feet were half worn off from running, but we brought her back to the shop and fed and her and got her back to normal.”

Allgood said the owner was contacted that both dogs were safe in Chilton County, and he could return to pick them up at any time. 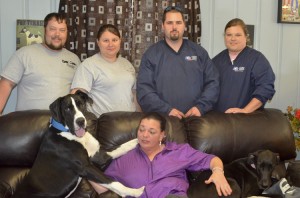 Joseph and Kristen Allgood, Mitchell Keener, Michelle Glass (back row) and Lisa Kromer (front row) have helped take care of the Great Danes since the wreck in January. Keener and Glass worked the scene of the wreck and helped rescue the dogs.

“He is still recuperating so we have had the dogs for over a month now,” Allgood said. “Everyone has become really attached to them. Our family loves them, people from the community have donated dog food and checked in on them, our customers enjoy seeing them in the shop. They have become really, really spoiled.”

Allgood said Susie is pregnant with puppies expected to be delivered in about two weeks.

“The owner of the dogs is working to try and come pick them up soon, but if he can’t make it within the next week, she will probably have the puppies here in Chilton County,” Allgood said. “The owner has agreed to let us have one of the puppies, because everyone has become so attached to the dogs.”

Allgood said he is thankful everything worked out with the situation, and appreciates all of the support from the community surrounding the dogs.

“We have just been overwhelmed by how many people have stepped up with these dogs,” Allgood said. “We have just loved on these dogs while they have been with us, and we will miss them when they are gone.”