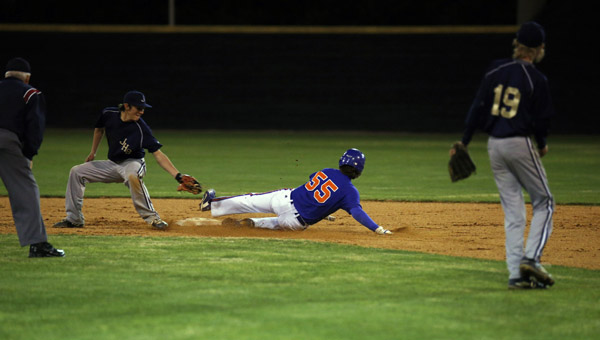 Griffin Beutler slides in safely at second base during junior varsity baseball action between Chilton County and Jemison on Wednesday. (Photo by Brandon Sumrall / Special)

In a preview of Saturday’s big matchup between the Chilton County High School and Jemison varsity baseball teams, the two schools’ junior varsity squads squared off on Wednesday night with the Tigers taking Game 1, 7-2, and the Panthers taking Game 2, 2-0.

Griffin Green got things started for the Tigers in the bottom half of the first inning with a leadoff double and Cody Minor followed by being hit with a pitch.

With Gabe Gray reaching on a Panthers’ error, all three Tiger runners made it around and gave CCHS an early 3-0 lead.

The second inning came and went with no change in the order, as would the top of the third, until the Tigers put another run on the board when Gray reached base safely and later scored to grow the Tigers’ lead to four.

The Panthers threatened after two players reached base in the top of the fourth inning but had no runs to show for the effort.

It did not take long for the Tigers to capitalize, as CCHS tacked on two more runs in the bottom half of the inning.

Grant Henderson reached after being hit by a pitch and Josh Traywick reached on a single, both helped to give the Tigers a 6-0 lead heading into the fifth.

The Panthers finally got on the board in the top of the fifth inning after a walk and an error on a ground ball.

The errors continued for the Tigers, as Jemison took advantage with a pair of runs that cut the deficit to four.

Gabe Jackson led off the bottom half of the fifth inning with a walk and later crossed home plate to extend the Tigers’ lead once again.

With the sixth and top of the seventh inning passing quietly, the Tigers took Game 1.

Game 2 began and effectively was decided in the top of the first inning, as two CCHS errors resulted into a pair of Jemison runs.

The defense and pitching of both teams managed a shut out the rest of the way, and the two early runs proved to be enough to give the Panthers the victory.

Chilton County High School’s softball earned its first victory of the season with a 6-4 win on the road against... read more