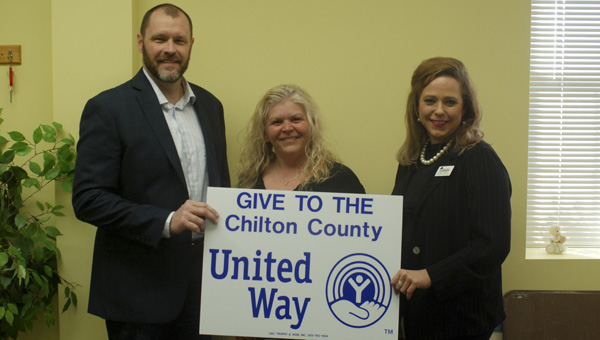 Hometown Lenders has partnered with the Chilton County United Way to give back to the community by taking a unique approach.

“If someone were to call up and complete a loan and mentions the Chilton County United Way, at the end of the process a $250 check would be given to the United Way,” Hometown Lenders Corporate and Non-Profit Coordinator Bryan Kitchens said.

According to Kitchens, the person borrowing the loan will also receive credit back for $250 once the loan is closed.

“The loan portion of it is something that has not been done before in our industry,” Kitchens said. “It’s a market that is untouched but is a way to help.”

Ginger Minor is the Hometown Lenders representative for Chilton County and is someone who understands the influence that the partnership can create, having been a resident of Chilton County her entire life.

Although Minor just joined Hometown Lenders, she feels that she can relate with the people of Chilton County and have an instant impact.

Hometown Lenders is based in Hoover, but the addition of Minor exhibits the sincerity of the initiative.

“After the crash of 2008, the government stepped in and basically put everyone on the same program,” Kitchens said. “We try to do the not-so normal in order to be different. It’s all about giving back to the community in a better way.”

The program began last year and was a learning process in many ways. The inaugural year dealt with the program’s creation, while the focus in Year 2 will be fixated on building upon that foundation.

“We got to the point last year where we had to take a step back,” Kitchens said. “We got it started, but now we’ve got to make sure that we do it correctly.”

The first step is developing the necessary connections within a community, and Kitchens believes that Hometown Lenders has gotten off to a great start through its partnership with Chilton County United Way.

According to Chilton County United Way Executive Director Shelly Mims, the partnership allows for even more continued growth and awareness of the United Way and its efforts within the county.

“It definitely helps us more than it helps them,” Mims said.

Benefits that are expected from the partnership include keeping money in the community, the promotion of United Way in the public’s eyes and an opportunity to gain volunteers.

“At the end of the day, if we have directed someone to the United Way who needs the help, then we have done our part,” Kitchens said.

Beans and rice: A “Beans and rice” sign is placed outside Trinity Episcopal Church on the first Saturday of each... read more