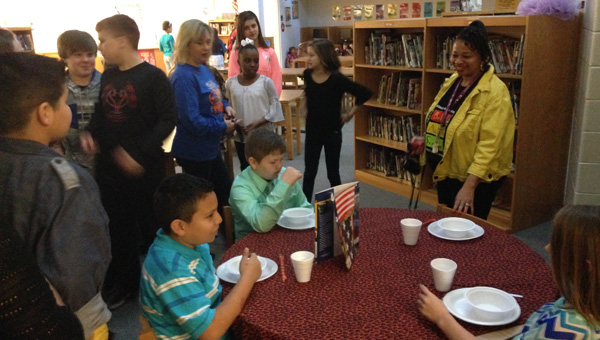 All together: Teacher Pamela Smith (right) and Clanton Intermediate School students look on as Janie Downs, Ryan Gray and Jesus Roman portray a group of mixed ethnicity friends eating a meal together during a black history “living museum” on Feb. 26. (Photos by Stephen Dawkins)

Clanton Intermediate School has long recognized Black History Month in February, but on Feb. 26, students made history come to life.

The museum featured students dressed up as historical figures from the Civil Rights Movement and other eras of black history.

“They had to research their character or person, do a short summary, collect pictures and become living statues during the museum,” Smith said.

The museum also featured a collection of inventions by black people put together with help from Dornescia Jordan’s third grade class. 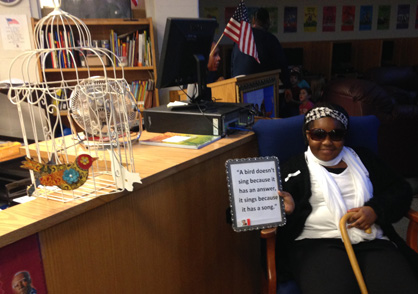 After years of a black history program in the school auditorium, Smith said she and students wanted to try something different this year.

“We were just experimenting,” she said. “They got involved [with the museum].”

Fellow students took turns touring through the museum on Feb. 26.

Niya Jordan said she enjoyed preparing and playing her part as Maya Angelou.

“I appreciate her poems,” Jordan said.

“He was the best basketball player in the world,” Cox said while pointing out other facts about Jordan.

Janie Downs, Ryan Gray and Jesus Roman had a mock meal together, symbolizing that people of different ethnicities weren’t always able to do so in public.

Downs said the three had a “great” meal, and Gray said he enjoyed researching for the role.

“Now, if you have black friends, you don’t have to eat separate from them,” Roman said.