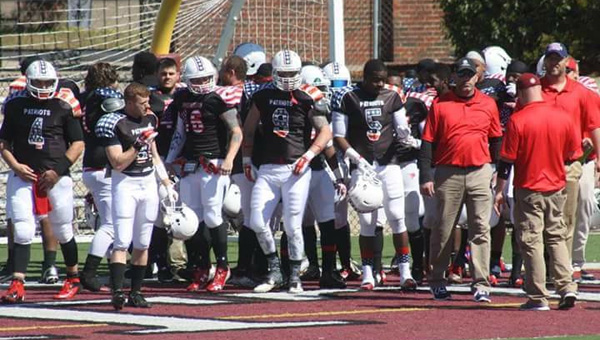 The Prattville Patriots prepare to take the field prior to the start of its preseason game at Stanley Jensen Stadium in Prattville on Feb. 27. (Photo Contributed)

Matthew Paulene of Billingsley High School and Faulkner University and Noe Chavez of Chilton County High School are members of the Prattville Patriots, a semi-pro football team that is about to begin its inaugural season on March 5.

Paulene will look to provide pad-popping hits and help out the defensive side of the ball as a linebacker, while Chavez will handle the kicking and punting duties.

Both players were selected as members of The Clanton Advertiser’s All-Area football teams during their senior years.

In 2008, Paulene capped off his senior campaign at Billingsley by being chosen as an All-Area linebacker, while Chavez was selected as the best kicker in the area and worthy of a first-team selection in 2009.

Chavez also showcased his powerful leg on the soccer field, as he proved to be a valuable member of Chilton County High School���s athletic program in a variety of ways.

The Patriots are a member of the Amateur to Professional Developmental Football League, and will play its home opener in week two on March 12 against the Opelika Chiefs.

Prattville will play 10 games with five games in front of the home crowd. All home games are played at Stanley Jensen Stadium in Prattville and will kickoff at 4 p.m.

The final regular season game will be played May 14 with the playoffs scheduled to start the weekend after.

Thirty-two teams throughout Alabama and its neighboring states make up the APDFL. The teams are separated into two conferences that are each broken up into four divisions.

“We’re trying to get the support that we need to start up a team,” Prattville head coach John Glasscock said.

According to Glasscock, the league offers an opportunity for players to continue playing football who have once played and are not ready to give it up.

The roster consists of 45 players that range from 18 to 34 years old.

According to Glasscock, the love of the game is the ultimate drive for so many of those involved with the Patriots.

“All the coaches are volunteers,” Glasscock said. “We can’t pay players because it would mess up college eligibility that they may still have.”

Other than the possibility of playing football at the college level, the APDFL can work as a feeder to careers within various professional leagues, such as the Arena Football League and the Canadian Football League.

Rosters can have a max of 65 players, which means that Prattville continues to look for players even as the regular season approaches.

According to Glasscock, the Patriots will continue the player search up to March 18.

Those interested can call Glasscock at (334) 306-6642 or email at headcoach@prattvillepatriots.com to organize a tryout and complete the registration process.

Verbena’s Stephen Bryant slides into second base and just beats the tag attempt by Trevor Wallace of Maplesville. (Photo by... read more