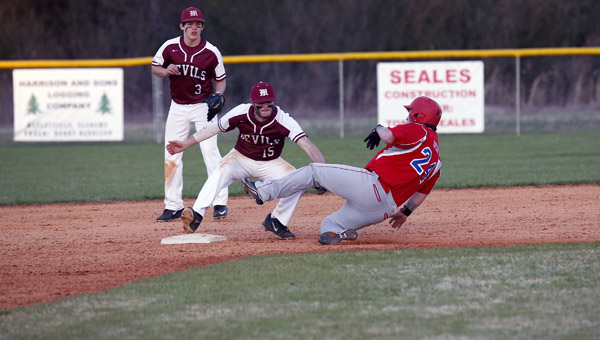 Verbena’s Stephen Bryant slides into second base and just beats the tag attempt by Trevor Wallace of Maplesville. (Photo by Brandon Sumrall / Special)

The 10-run mercy rule brought an end to a battle of Red Devils on Feb. 26, as the Maplesville varsity baseball team knocked off Verbena 11-0 in five innings.

Chris Cook started things off with a one-out single in the top of the first, but a pair of Verbena strikeouts ended the top half of the inning.

Meanwhile, Maplesville picked up three runs in the bottom half, as Thomas Schoener started the opportunity by reaching on an error and later scored on a single by Alex Smith.

Devan Wallace put two aboard for Maplesville with another single, while a double to left center field by Trevor Wallace scored two more runs for Maplesville to make the score 3-0.

The top half of the second began with Dillon Walker reaching after being hit by a pitch, a single by Ja’Starza White, and a Justin Quinn walk to load the bases for Verbena.

A soft ground ball back to the mound led to Walker being thrown out at home on a force out, and two strike outs later, Verbena ended the inning still down three runs.

The bottom half of the second inning saw four more runs for Maplesville.

After two outs on consecutive ground balls, Schoener got things started with a single up the middle, and Marion Girlie followed it up with a single of his own.

Smith doubled to score Schoener, while Devan Wallace answered with a two-run single that scored Girlie and Smith.

It did not take long for Devan Wallace to come around to score on a double by Trevor Wallace.

After two innings of play, Maplesville held a 7-0 lead.

Cook got things started once again for Verbena in the top of the third but was stranded on third base after consecutive infield ground balls and a strikeout.

Smith led off with a single for Maplesville and was followed by an Aaron Dunkin walk, as a double by Schoener scored Smith to give the hometown Red Devils an 8-0 lead.

Tristan Short and Jacob Cleckler reached base safely for Verbena in the top of the fourth, but two strikeouts once again brought Verbena’s half of the inning to an end without any runs to show for their effort.

Back-to-back singles by Devan Wallace and Trevor Wallace led to a two-run triple from Smith, who later scored on a single by Aaron Dunkin that gave Maplesville an 11-0 lead.

Stephen Bryant led off with a single to start the fifth and was followed by a walk from Jason Adams.

However, two strikeouts knocked Verbena down to their final out, and an infield ground ball back to the mound forced an out at second base to bring the game to its final.

Smith got the start for Maplesville and pitched three innings with six strikeouts, two walks and two hits.

Cook led Verbena with a 2-for-3 performance at the plate with two singles, while Eric Mims handled the pitching and allowed 13 hits and one walk with three strikeouts.

Langston returns to where it all started

After a successful softball career at Verbena, Kala Langston makes her return as the program’s head coach. (Photo by Anthony... read more