Langston returns to where it all started 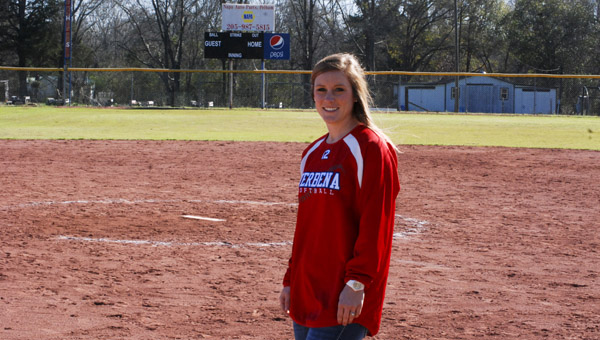 After a successful softball career at Verbena, Kala Langston makes her return as the program’s head coach. (Photo by Anthony Richards / Advertiser)

Kala Langston has made her return to the Verbena softball program, as she begins her first season as head coach of the Red Devils’ varsity and junior varsity teams.

Making the transition to the role of head coach is nothing new for Langston, as she was at the forefront of Verbena’s transition from slow-pitch to fast-pitch during her playing days from 2001-2006.

According to Langston, she can relate with her team at many levels after already experienced many of the things that they are about to be faced with.

“I know how it is to play at Verbena,” Langston said. “It’s a real close community, and everybody has seemed to get behind with their support.”

Langston’s ties to Verbena run deep, having attended and played softball under her father, Keith Moore.

“He definitely pushed me a little harder than others on the team,” Langston said. “He prepared me for what I saw at the college level.”

After graduating from Verbena, Langston played four more years at the college level as a shortstop for Troy University from 2006-2010.

“I was not a very vocal leader, but I tried to lead by example on the field,” Langston said. “I definitely try to be more vocal now that I’m a coach.”

Her college career was successful, as she set the school record for the most stolen bases while at Troy.

Langston hopes that the success she had as a player will translate into her coaching career.

Prior to her arrival at Verbena, Langston spent time as a coach at Martin Middle School in Dallas County, Clanton Middle School and most recently helping out last year at Thorsby.

Now as a head coach, she looks to continue to stress to her teams the importance of having an aggressive style. That begins with taking advantage on the base paths.

“I showed them my technique, and I made sure that they knew we were going to be stealing bases,” Langston said. “They’ve listened and they want to learn.”

Langston believes that she has the pieces in place to adopt this style of play right away.

“We’ve got some speed, and our bats have been hot,” Langston said.

That was evident on Thursday night, as Verbena (0-1) opened its season with an 18-11 loss at home against Dallas County.

Despite the varsity loss, both teams proved to have plenty of early season momentum at the plate.

“Now we’ve just got to get their confidence up,” Langston said.

The basketball playoffs are in full swing with area tournaments underway or about to begin this week. The Thorsby girls... read more