Work still to be done on County Road 42 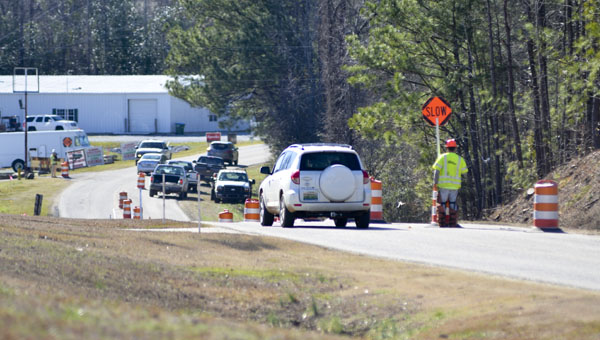 Project on County Road 42 started on Feb. 4 to fix some of the rough spots on the road, but work is still left to be done for the state-approved project. (Photo by Emily Reed)

Motorists traveling on County Road 42 within the last month have probably noticed some improvements.

“They were fixing some of the rough spots on the road,” Jemison Mayor Eddie Reed said. “They still have a lot more work to do, though, to bring the road up to code.”

One of Jemison’s main thoroughfares is set to be resurfaced through a state-approved project.

Work began on the road Feb. 4, but Reed said the project is not finished.

“Right now, we aren’t really sure when everything is going to be finished,” Reed said. “We know they have more work to do, but we just aren’t sure when it will be completed.”

The resurfacing project was allowed 90 working days to complete the project, according to ALDOT’s website.

On working day projects, the contractor will not be charged time for issues that prevent work beyond the contractor’s control (examples are rain, too wet, material temperature restrictions, holidays, etc).

According to an ALDOT representative in 2015, the project was estimated to be completed by the summer of 2016.

“We have heard that the resurfacing of the road will not be completed until they redo the bridge,” Reed said. “I don’t think they will complete the paving until the bridge is complete, but when that happens we aren’t sure.”

The Jemison City Council passed a resolution in September 2015 regarding the project saying the city entered into an agreement with ALDOT for the resurfacing on County Road 42 from U.S. 31 to County Road 51 and construction of a bridge replacement culvert on County Road 42 over Yellow Leaf Creek.

The length of the entire project is 4.341 miles.

“We are excited about the project, but we are also hoping that we will get some more information about how long the project is going to take until things are complete,” Reed said. “Right now, we are just waiting to see when the next phase of the project will begin. Thankfully, the rough patches on the road were fixed, but the work is still not done. They have several more layers of asphalt to put down.”