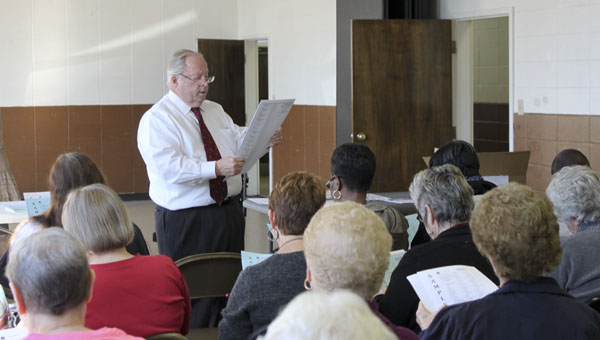 Chilton County poll workers attended a demonstration of voting machines Thursday before voters head to the polls for the Primary Election on March 1.

“This is a party primary,” Chilton County Probate Judge Bobby Martin told the group. “When people walk in the door to vote on Tuesday, they will have to declare a party. If someone doesn’t want to vote for the candidates, there will be a separate ballot where they can just vote for the wet/dry referendum.”

Prior to the start of the public demonstration, the three candidates running for Chilton County District Court Judge including Chris Speaks, Ali Garrett and Angie Mayfield spoke to those in attendance.

Martin said the system used now by poll workers indicates what type of ballot style an individual should receive before voting.

“All they will have to tell you is who they are and you can determine what type of ballot style they will receive,” Martin said. “There are four ballot styles for this election. Some of the ballots will not have the wet/dry referendum on them because those people are located in the city limits of a city that is already wet.”

Martin said this election will also have presidential delegates on the ballot which could lend itself to confusion for some voters.

Anything older than 15 years old required an upgrade.

Chilton County qualified for a Help America Vote Act (HAVA) grant allowing each precinct an iPad for voting, which poll workers will also utilize for the upcoming election.

Martin said he is optimistic things will go smoothly this election as many poll workers have experience working the newer technology from the 2014 elections.

Some changes this election compared to previous years include if an individual is 70 or above or handicapped and requests to be moved to the front of the line, they have permission to do so.

“If you have a line of people waiting to vote, and someone over the age of 70 comes up and says they want to move to the front of the line, they can now do that,” Martin said.

Another change is a form for poll workers to sign if an individual does not have a valid photo ID and the individual is positively identified by two election officials.

“You will have to fill out a form saying you have identified the person trying to vote,” Martin said.

A complaint voiced from some individuals during the 2014 elections was poll workers standing too close to the voting machines.

“Just stand back from them,” Martin said. “Let people put their ballots in the machines, and if there is an issue, help them, but don’t take the ballot from people. They need to be able to put the ballot in the machine by themselves.”

Martin said he wasn’t sure what kind of turnout poll workers could expect for the Primary Election, but encouraged poll workers with questions to call him.