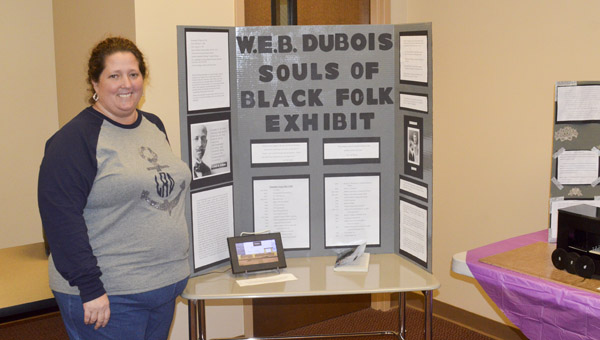 Jefferson State Community College student Lori Rickerd stands next to the exhibit about the book “Souls of Black Folk” written by W. E. B. Du Bois. Rickerd was a member of the group of students that created the exhibit. (Photo by Anthony Richards / Advertiser)

Jefferson State Community College in Clanton is doing its part to share in the remembrance of Black History Month with a museum that will be on display for the remainder of the month.

According to Ashley Kitchens, Associate Dean of the Clanton Campus, the college has a black history committee and before every February they try to think of things to do for Black History Month.

In the past, Jeff State has had movies, speakers and various presentations in order to commemorate the month.

This year, the goal was to involve the students in a way that would spark their interest while also celebrating the cultural aspects, Kitchens said.

“We thought that it would be cool to get a cross-curriculum look at Black History Month,” Kitchens said.

The result was a museum that hugs the walls of the library with displays and exhibits of Black History through art, literature and history.

As an English instructor, Kitchens teaches about the Harlem Renaissance in her American Literature class.

“We looked at some writings and pulled up information on some of the key players and ideas of the time,” Kitchens said. “We put together a crisis magazine with articles about different people and some of the incidents that were going on.”

The art was created either directly mirroring certain artwork or following a certain style that is significant to the culture.

“Students have to apply what they are reading instead of just learning facts,” Kitchens said. “It gets them thinking about how they could visually tell the story.”

Lori Rickerd, a student at Jeff State, contributed to the museum through both her art and history classes. She helped complete an exhibit on “The Souls of Black Folk” by W. E. B. Du Bois and also added two paintings to the collection.

“It puts a different perspective on slavery and real life,” Rickerd said. “It feels pretty good considering that I have a lot of work in there on display. As the years go, I feel that there will be an even bigger turn out.”