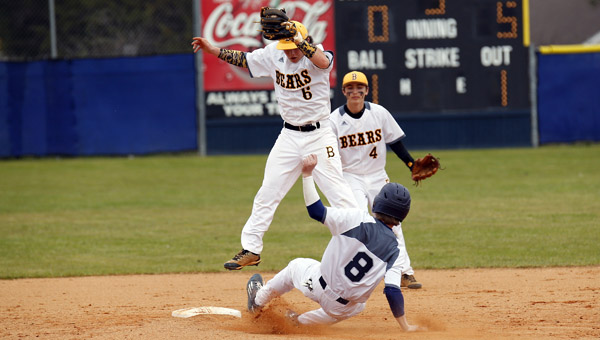 Austin Moore of Jemison (No. 8) slides under the tag attempt of a leaping Noah Godwin of Billingsley (No. 6) during the Jemison Baseball Invitational on Saturday. (Photo by Brandon Sumrall / Special)

The Jemison Panthers took a clean sweep of their baseball invitational tournament on Saturday with wins over the Billingsley Bears (14-4) and the St. John Paul Catholic Falcons (11-0).

Pitcher Chase Deason and the Panthers retired the Bears in order through the top half of the first inning and were on the board with three runs in the bottom half of the inning.

Trae Sanders reached on a leadoff error, and Will Johns doubled to center field to put the first runs of the game on the scoreboard.

Johns later came around to score on a sacrifice fly from Logan Ray and a double by Deason, which gave the Panthers an early 3-0 lead.

The Bears had another three-up-three-down inning, while the bottom half of the inning resulted in two more runs for the Panthers.

A leadoff walk to Hunter Hood helped set up a run scoring double by Sanders, who later scored on a wild pitch, as Jemison took a 5-0 lead after two innings.

Jamie Barnett gave Billingsley its first hit of the game with a two-out double but with no runs to show for the effort.

A single by Deason led to a run-scoring double by Banks Woodley. Woodley then scored on a wild pitch, and Mathew Ramsey crossed home plate on a Bears’ error, as the Panthers’ lead became eight after three innings of play.

After a scoreless top of the fourth by Billingsley, Jemison tacked on six more runs in the bottom half thanks to a double by Will Lenoir and back-to-back walks that led to a two-run single by Austin Moore.

Hood plated another Panthers runner with a single of his own, and the Panthers took a 14-0 lead to the top of the fifth inning.

Walker Motley and Jordan Thompson each reached base with a walk, and Barnett was hit with a pitch to load the bases for Billingsley with only one out.

Noah Godwin took advantage and drove in the first two Billingsley runs with a single.

Drayton Dubose doubled up the middle to put another Bears run on the board, but a ground ball led to the third out and ended the game under the mercy rule.

Deason led the Panthers at the plate as well as on the mound, as he pitched into the fifth inning and allowed just one hit with six strikeouts.

He finished the game by going 2-for-2 at the plate with a single, a double and RBI.

Barnett got the start for Billingsley and allowed three hits, two walks and two earned runs while striking out a pair.

Godwin went 1-for-3 with a single and two RBIs.

Billingsley won a Game 2 matchup with St. John Paul behind a nine-run bottom of the fourth inning.

Eric Willis started the game and struck out five, walked three and allowed just one hit in three innings of work.

Motley led the Bears at the plate with a three-run single.

The Panthers wrapped up the day’s festivities with a victory over St. John Paul as well.

Clay Cunningham pitched a complete game shutout with five strikeouts, one hit and one walk.

Hood added a perfect 3-for-3 performance at the plate, while Lenoir connected on a two-run home run for Jemison.

Jemison head coach Jason Easterling rakes the clay on the pitching mound in preparation for the Panthers’ home opener against... read more