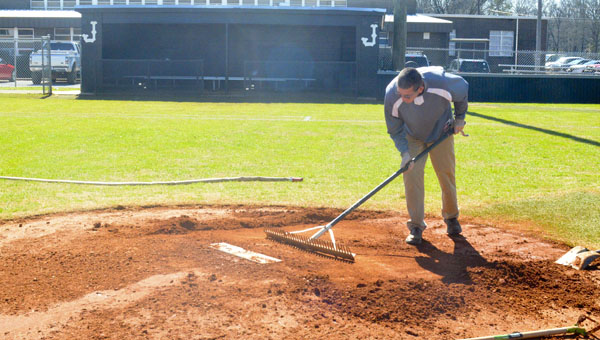 Jemison head coach Jason Easterling rakes the clay on the pitching mound in preparation for the Panthers’ home opener against Shelby County on Feb. 19. (Photo by Anthony Richards / Advertiser)

Jason Easterling is the longest tenured baseball coach in Chilton County, having been the head coach at Jemison High School since the 2008 season.

Over that time, he has developed into the coach that he is today and has gained a better understanding of how to build relationships with his players.

“I’ve learned that every kid is different in what they respond to,” Easterling said. “You’ve got to be fair, but you can’t handle every kid exactly the same way. I finally figured it out once I had kids.”

Easterling was a teacher at Jemison for about five years prior to gaining his role with the baseball program. Currently, his children attend the school and his wife works there.

According to Easterling, it always felt like home from the time that he first started.

“I don’t see myself being anywhere else,” Easterling said. “I’m happy to be here, and I’ll stay as long as they’ll let me.”

Easterling has gradually built the Panthers’ baseball program with a family atmosphere in mind.

“The community support is great,” Easterling said. “You’ll have people come to a baseball game because they see the lights on.

The majority of the 2016 baseball team has been closely followed by Easterling throughout the years.

“It helps to know them and to have watched them grow up,” Easterling said. “They now who you are and want to be a part of it.”

Since they were first introduced to the sport, those players have experienced the family atmosphere that is Jemison’s baseball program.

“Baseball has a lot of unwritten rules and I teach them right off the bat what behavior is acceptable,” Easterling said. “If you teach them the code early, they adhere to it pretty well.”

Easterling credits the players that he has coached for the continuity that he has been able to establish.

“Your success is relative to your athletes,” Eastlering said. “I’m not a good coach, but I’m just a good manager of what I’ve got.”

Easterling works closely with his pitching staff, and understands that behind any sustained success is a reliable presence on the mound.

According to Easterling, the team will reflect who is on the mound, and unless you have a lot of hitters, pitching is the key to winning.

“We do it homegrown, and we do the best with what we’ve got,” Easterling said. We’ve been fortunate, but everything these kids have done is in the past.”

By Anna Adams | Special to the Advertiser The CCHS Gridiron Club is looking to upgrade the appearance of Tiger... read more