Thorsby meets its match in regionals 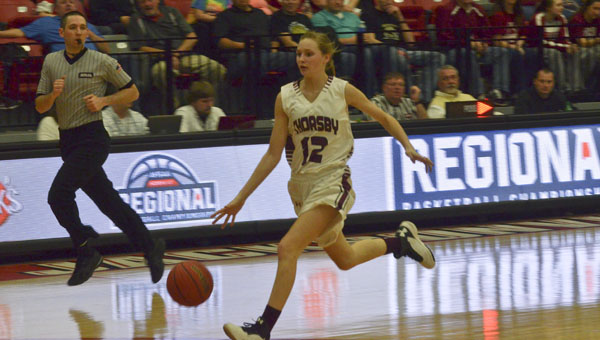 Thorsby’s Adi Argent flies down the court against Ider during the AHSAA Northeast Regional competition on Friday. (Photo by Anthony Richards / Advertiser)

Thorsby’s run through the girls basketball playoffs came to an abrupt end with an 87-45 loss to Ider during the AHSAA Northeast Regional at Jacksonville State University and Pete Mathews Coliseum on Friday night.

“You can’t take away this experience, and it’s only going to make us better,” Thorsby head coach Leighsa Robinson said. “I’m planning on being back here next year.”

Quick scoring runs to open both halves proved too much to come back from for the Rebels.

Thorsby was outscored 53-15 in both the first and third quarters combined.

The biggest difference  in the game was the quickness of Ider, which frustrated the Rebels and resulted in telegraphed passes in transition and sudden points at the other end of the court for Ider.

“They did to us what we had done to folks all year,” Robinson said. “That’s just the nature of the beast.”

The defense tightened up in the second quarter, but the damage was done and Thorsby trailed 39-21 at halftime despite outscoring Ider 15-14 in the quarter.

However, Thorsby scored 13 unanswered points to start the fourth quarter and showed that their season would not end on a quiet note.

“That’s been the trademark of them all year,” Robinson said. “They continued to fight all the way until the bitter end.”

The offensive spark was fueled by aggressive drives and steals on the defensive end. Lilly Barnett received an inbound pass and drained a straightaway three-pointer to cap a 13-0 run for the Rebels.

Barnett and Adi Argent paced the team, playing 30 minutes each, as the two combined for 29 points from their guard positions.

Argent led the offense with 17 points, while Kerri Robinson approached a double-double with 16 points and nine rebounds.

“We’re making memories, and it was an experience that the entire team and I will never forget,” Robinson said. “We were glad to be here, and maybe each year we’ll just keep taking a bigger step.”

Thorsby’s boys basketball season came to an end, as the Rebels lost 63-49 on the road against Cleveland in the... read more