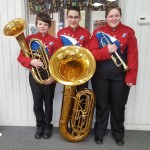 Tucker also made it into the Alabama All-State Band.

Gingo and Williams were recommended to the District V Middle School Honor Band because of the constant vigilance, hard work and dedication to band.

“They work extra hard to learn every piece of music given to them,” director Randi Simpson said. “They go above and beyond because they genuinely love band!”

Tucker has not only practiced a lot on her own but has also paid for trumpet lessons in order to further her craft. She auditioned alongside 32 other high school trumpet players and came out in the top six, earning a spot in the Alabama All-State Band.

“We are very proud of these exemplary students,” Simpson said.

The Alabama District V Honor Band will be held Feb. 19-20, culminating in a concert at 2 p.m. on the campus of the University of West Alabama in Livingston.

The All-State Band will be held April 14-16 in Mobile and culminate in a concert on April 16 in the Mobile Convention Center.