Thorsby’s girls basketball team kept its season’s hopes alive with a 56-52 home victory over late-charging Cleveland in the sub-regionals on Monday.
With the win, the Rebels erased the memory of losing in the sub-regionals a season ago. Though it is unchartered territory, Thorsby understands a consistent mindset is the key to success.
“Being in the sub-regionals last year really prepared them for this,” Thorsby head coach Leighsa Robinson said. “This year, they knew what to expect, and we practiced specifically for that.”
Both teams looked to push the game’s pace from the start, and it quickly developed into a frantic atmosphere, as players made big shots and attempted to chase down every loose ball opportunity.
“We knew we couldn’t give up, and that we had to get back on defense,” Thorsby guard Adi Argent said. “It was all about working hard and trying not to foul. We know that we can’t get to offense unless we play a good defense.”
Lilly Barnett finished with a team-high 20 points while Argent was close behind with 18 points of her own.
The two were deadly from long-range all game, and proved vital in helping slow down Cleveland second half scoring runs on several occasions.
Every time that Cleveland’s momentum appeared ready to boil over, the Rebels answered back with excellent ball movement and points on the offensive end that brought the home crowd to its feet.
Lauren Wyatt showcased her determination in the paint with consecutive baskets in the third quarter. 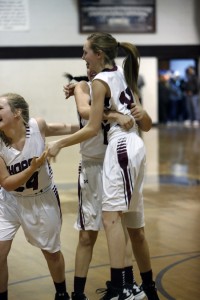 Lauren Wyatt, Lilly Barnett and Adi Argent share in the jubilation after Thorsby defeated Cleveland at home in the sub-regionals on Monday. (Photo by Brandon Sumrall / Special)

The Rebels’ rebounding came up big once again late in the fourth quarter as Thorsby skied for rebounds and eliminated second-chance opportunities in the final minute, when every possession carried even more importance.
“We came out with the right mindset and knew that we were capable, but it came down to how hard we were willing to work,” Argent said. “We played every quarter as hard as we could, and that is what made the difference.”
Kerri Robinson added 10 hard-earned points with six of those coming from the free-throw line.
“The competition is only going to get more fierce from here,” Argent said. “We’ve got to be ready.”
In other girls sub-regional action from around the county on Monday night, Isabella lost to Autaugaville 39-21, while Billingsley was defeated by Keith 69-21.
Thorsby has the final girls and boys basketball teams from Chilton County remaining in the state playoffs.
The boys were scheduled to play Tuesday in the sub-regionals against Cleveland.

Rebels win area championship again
After some anxious moments in the first half, the Thorsby girls varsity basketball team took over the game in the second half for a sound 70-48 victory on Feb. 10 over Vincent in the final of the Area 9-2A tournament.
Adi Argent and Lilly Barnett exploded for 20-plus points apiece, as Argent finished with 26 points while Barnett tallied 24 points.
“They are both smart and they handle the ball well,” Thorsby head coach Leighsa Robinson said. “They can just run the offense because they are basketball smart.”
Kerri Robinson added 14 points and joined Argent and Barnett in double figures scoring.

Brock Higgins of Thorsby (No. 4) surveys the court looking for an open man during the Area 9-2A tournament final... read more