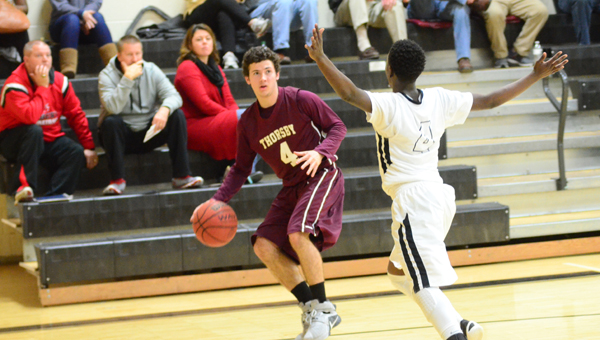 Brock Higgins of Thorsby (No. 4) surveys the court looking for an open man during the Area 9-2A tournament final against Vincent on Feb. 11. (Photo by Baker Ellis / Shelby County Reporter)

For the ninth consecutive year, the Vincent basketball Yellow Jackets won their area tournament on Feb. 11 with a 71-50 victory over Thorsby that was not even as close as the score suggested. The win moved Vincent to 23-6 on the season, and 8-0 overall in area play.
“For us we always feel like the first step is winning your area,” Vincent head coach John Hadder said after the game. “You win your area you get to host the sub-regional game, which we always think is key. We usually don’t talk about trying to win the regional or anything like that; we just want to win our area. You win your area first and go from there.”
What started out as a competitive game in the first quarter turned into a rout. Thorsby took an early 10-7 lead off a Brock Higgins three-pointer with less than four minutes to go in the first quarter, and the Rebels did not score again until midway through the second quarter.
Vincent went on a 15-0 run that encompassed two quarters and was highlighted by buckets from Stephen Campbell, Terrell Calhoun, E.J. Datcher and Zavien Kelley.
The Yellow Jackets imposed tight half-court pressure defense that Thorsby simply had no answer for, and led to a number of transition buckets in the second period.
Down 24-10, Higgins hit another three for Thorsby to stop the bleeding, but the damage was already done, and Vincent went into the half with a 32-18 lead.
The Yellow Jackets never led by less than nine the rest of the way.
When the Rebels did pull the game back to within single digits in the third quarter, Vincent promptly went on another 13-0 run, which was punctuated by a thunderous two handed slam from Datcher off a missed three.
Vincent led 52-31 after three, and the fourth quarter was merely a formality.
When asked about moving forward and the potential this team has of making another run at the Final Four, Hadder was predictably cagey.
“We’re just trying to play well,” Hadder said. “If you play well things fall into place. Honestly, this group has had to learn the hard way at times that they have to do everything right in terms of executing and how hard we play. When we don’t do things right we’re very ordinary. When we play hard, we’re good, and when we don’t, we’re not that good. It’s hard to say what’s going to happen.” Datcher led all scorers with 19 points and also had 13 rebounds while Higgins had 13 to lead Thorsby.
The only other action on Feb. 11 was Chilton County’s boys basketball squad which lost 77-46 against Paul Bryant in the semifinals of Area 6-6A.