Bice signs to play football and baseball at Huntingdon College 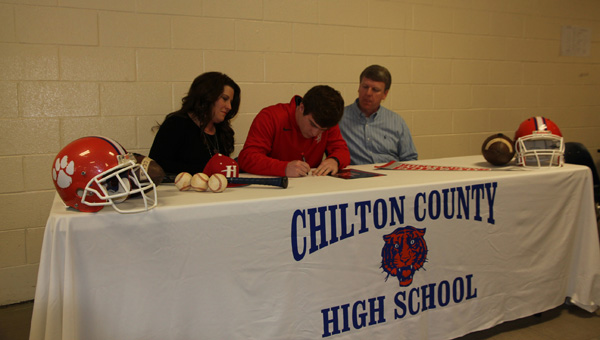 Corbin Bice signs Tuesday to play football and baseball at Huntingdon College with his parents Sonja Bice (left) and Jason Bice (right) by his side. (Contributed)

It was an emotional day that would not have been made possible without a necessary amount of determination.

“It was all about being so proud because he set this goal way back in life,” Corbin’s father Jason Bice said. “It’s just a great feeling to see the man that he’s become.”

Bice tore his ACL and was injured during his senior football season, which made the recruiting landscape uncertain for both Bice and his family.

“We didn’t know what was going to happen after an injury, but it has been a great experience to watch him go through the recruiting process,” Bice said.

However, Huntingdon College continued to show interest and never waivered from its desire to make Bice a member of its athletics program.

The Division III program allowed Bice the opportunity to compete in both football and baseball, and proved to be a deciding factor in Bice’s final choice.

“That is something that really appeals to him and sold him there,” Bice said. “As a parent, Huntingdon College is a really great academic school.”

With Huntingdon College located in Montgomery, the family will have plenty of chances to watch games, which could also help with Bice’s transition, especially his freshman year.

“Everything felt right when we went on our visit,” Bice said. “He’ll have friends there, so its not like he’ll be alone.”

Bice started playing baseball in the Clanton City League when he was 4 years old and began playing football with the Tiger Orange at Clanton City Park as a 5-year-old.

Ever since then, the two sports have held a special place in his heart and will continue to be a major part in his life as he moves on to college.