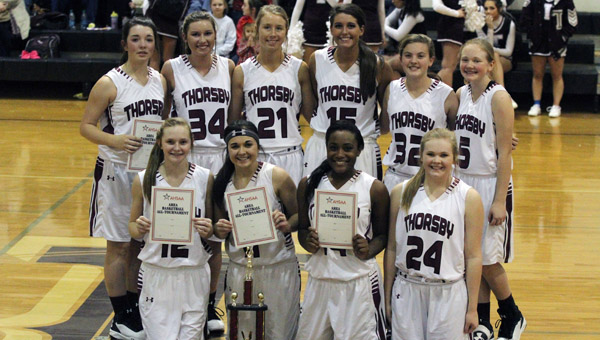 After some anxious moments in the first half, the Thorsby girls varsity basketball team took over the game in the second half for a sound 70-48 victory on Wednesday over Vincent in the final of the Area 9-2A tournament.

Adi Argent and Lilly Barnett exploded for 20-plus points apiece, as Argent finished with 26 points while Barnett tallied 24 points.

“They are both smart and they handle the ball well,” Thorsby head coach Leighsa Robinson said. “They can just run the offense because they are basketball smart.”

Despite the impressive final statistics, it took Thorsby a little longer than normal to find a rhythm that they are so accustomed to establishing.

Vincent kept the deficit within reach for much of the first half and converted a three-point play as time expired and cut the Rebels’ lead to 21-16 heading into halftime.

However, Thorsby would not be held down for long and scored early and often to open the second half.

“We made some adjustments at halftime by changing up our defense to what they were doing,” Robinson said. “Our defense played hard tonight, and that opened up better offense for us.”

Argent attacked the basket while Barnett nestled in a three-pointer from the right corner to help grow a 14-point lead less than two minutes into the third quarter.

“We had a good vibe throughout the day,” Thorsby guard Barnett said. “We felt like we had it under control.”

Due to Vincent’s physical play, Thorsby lived at the free-throw line in the second half. The Rebels took advantage by capitalizing on several of those occasions.

The Rebels’ lead extended to 21 points following a fourth quarter layup by McKinley Sellers essentially put the game out of reach for good.

As the area champion, the Rebels avoid having to travel for their next game in the sub-regionals.

“It’s an honor for me to be part of this team and the program,” Robinson said.

Thorsby will play in front of its home crowd Feb. 15 at 7 p.m. against the runner-up from Area 10-2A, which will be Ranburne or Woodland. The two schools were scheduled to play on Thursday.

“We’ve just got to worry about working together and playing basketball,” Thorsby senior Kerri Robinson said.

Other county action on Wednesday included the Isabella girls basketball team losing 54-21 on the road against Keith in the Area 5-1A final, while Billingsley’s girls fell 49-32 against Autaugaville in the Area 6-1A final.

The basketball playoffs are in full swing with area tournaments underway or about to begin this week. The Thorsby girls... read more