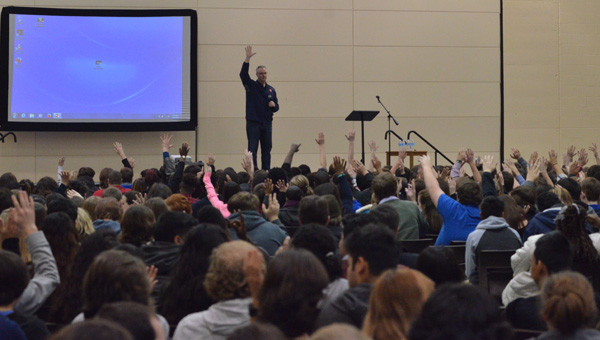 Mike Lutzenkirchen knows how serious the consequences of poor decisions can be.

Lutzenkirchen’s son, Phillip, a 23-year-old former Auburn University football star, was killed in a wreck after a night of drinking.

Mike Lutzenkirchen was among a group of speakers who talked to all Chilton County juniors and seniors on Wednesday at a “Choices Matter” Life Awareness Conference held at Clanton Conference and Performing Arts Center.

Hicks said he heard Lutzenkirchen at a police conference in the summer of 2015.

“After hearing his presentation, on the way back, I was talking to my wife and said, ‘This is the message the teenagers in our county need to hear,’” Hicks said.

Hicks worked with Lutzenkirchen and school officials to find a date to bring the speaker to the county.

Lutzenkirchen founded the “Lutzie 43 Foundation,” an organization with a mission of using Philip Lutzenkirchen’s memory and example to help “serve and lead with humility, cherish relationships, remain genuine and authentic, live a life full of spirit, and learn and adjust.”

At the event Wednesday, Mike Lutzenkirchen talked about, among other topics, being “available” for those you come in contact with, use of social media, and the importance of preparation.

Lutzenkirchen said studies show 24 percent of high school students drink alcohol, and talked about his son’s decisions that ultimately led to his death as a passenger in the vehicle during a wreck.

“There was nobody at that farm that forced Philip to drink to the level that he did,” Lutzenkirchen said. “When the time came to say ‘enough,’ he had another.

Other speakers included Mandy Johnson and C.J. Robinson with the district attorney’s office, on the dangers of social media and texting; and author and attorney Liz Huntley, on not accepting excuses.

“It’s all about making choices,” Hicks said. “Every choice you make is going to have a consequence or a benefit.”

Hicks said the conference targeted juniors and seniors because they are about to become legal adults—and potential punishment for crimes becomes harsher than it is for juveniles.

Hicks said he began the conference by telling about 1,200 students in attendance that the speakers were “going to tell you like it is.”

Hicks thanked Superintendent of Education Tommy Glasscock and the Chilton County Board of Education for their help in organizing the event, and said he would like to see the conference become an annual event.