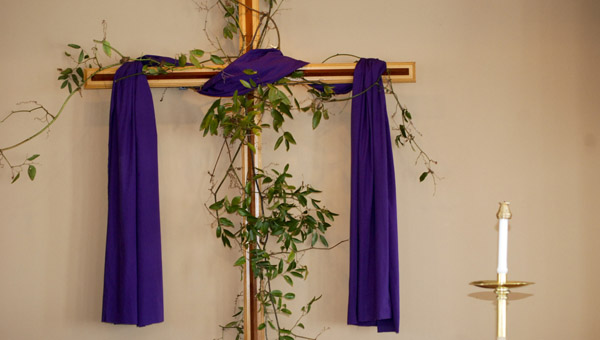 A purple cloth is draped around the cross that sits behind the altar at Trinity Episcopal Church. Purple is the color associated with Lent. (Photo by Anthony Richards / Advertiser)

Ash Wednesday marks the beginning of the Lenten season and was celebrated throughout Chilton County.

The Rev. Hunter Pugh celebrated with his congregation at Verbena United Methodist Church.

“For us, it is a season of preparation, where we think about ways that we have strayed in our relationship with God,” Pugh said. “We reflect on spiritual disciplines that draw us closer to God.”

Ash Wednesday is the first day of Lent, which last for four days and ends with the celebrating of Easter Sunday. It is observed by Roman Catholics, Methodists, Presbyterians, Lutherans and Angelicans.

According to the gospels of Matthew, Mark and Luke, the Lenten season represents the 40 days that Jesus Christ fasted in the desert.

It is a way in which Christians pay homage and remembrance of the sacrifice that Jesus made with his death on the cross.

The use of ashes is a symbol that is common in several religious denominations.

“It is significant because it reminds us of our mortality,” Pugh said. “We all came from ashes, and to ashes we will return. We are given the chance to be the people that God has called us to be.”

During the 40 days of Lent, Verbena United Methodist Church will look to perform acts of service.

“The Great Day of Service” is scheduled for March 12 and will consist of Verbena United Methodist teaming up with fellow Methodist churches from around the area to help with various projects.

According to Pugh, the church is in contact with Verbena High School in order to come up with certain dealings that can be held in conjunction with the school.

Pugh’s father, a minister in Montgomery, died two years ago in a car accident on Ash Wednesday.

This circumstance has given Pugh a unique perspective of the realism that can grab hold during that period on the calendar.

“I saw people being reconciled and asking questions about life and death,” Pugh said. “You could see a transformation in people. Life is very short, and you can make the most of it or let it go by the way side.”

Also joining in on the day’s events was Trinity Episcopal Church in Clanton, where purple became the primary color throughout the church.

“The dark colors are there and flowers are gone,” Father Bill King said. “It is a much more somber tone and all about preparation for Easter.”

Lent is often celebrated by giving up something enjoyed or a bad habit, as well as participating in a fast of certain foods or during certain days.

According to King, Ash Wednesday and Good Friday are the chosen days Episcopalians fast from heavy meals.

A unique service that Trinity offers is a curbside service that delivers ashes and a blessing to those who drive up at the front of the church in their vehicles.

The service has been provided by the church for three years and has welcomed any who were intrigued and willing to drive up.

“People out of the blue stop by to get their ashes,” King said. “It’s not huge numbers, but it welcomes people who don’t normally go to church. They’re curious.”

Something about Lent captures the spirit of Clanton and the entire world. It rekindles people’s faith and allows them to find themselves once more.

“We see people at Lent and Easter that we don’t see any other time the rest of the year,” King said.

Flutter 2016 continues to spread the word

A table full of items gets looked over by event attendees during the silent auction portion of Flutter 2016 on... read more