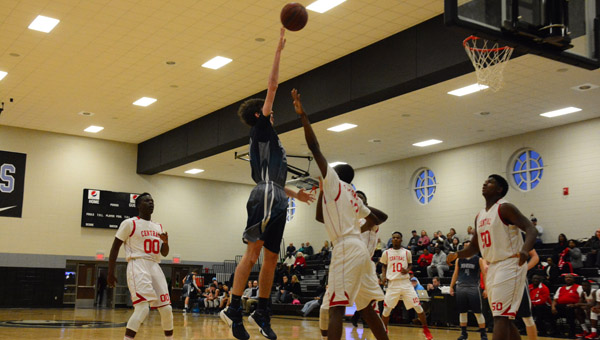 In a win-or-go-home scenario, the Central Falcons and Jemison Panthers squared off in the first round of the Class 5A Area 7 Tournament and after all was said and done, it was the Falcons who cruised to a 56-28 victory at Helena High School on Tuesday.

The Jemison Panthers couldn’t get anything going offensively and was due in large part to the pressure of the Central defense forcing multiple turnovers.

“We’ve known that all year long our defense has been our bell cow,” said Central head coach Robert Watson. “We knew that Jemison was a real quick team so we wanted to slow them down a little bit and make them really have to work in half court situations. It seemed to work for us.”

Jemison scored just one field goal in the first half and added two free throws as Central forced the Panthers to commit numerous turnovers and force tough shots.

Central was able to take advantage of the Jemison slump on the offensive side of the ball and took a 32-4 lead at halftime.

Central was led by Courtney Davis’ 12 points in the game, with all 12 points coming from three point shots.

Central connected on six three-points shots in the game and Watson said the goal offensively was to move the ball around the perimeter and get quality shots.

“That was our idea, to move the ball around the perimeter and we did that working the ball from side to side,” said Watson. “We were patient enough to take our time and had a pretty good shot selection. We also realized when we had a really good shot.”

Jemison shot a better percentage from the field in the second half, but the deficit was too much to overcome as Central never faltered and cruised to the 56-28 win, ending the Panthers season.

Ty Leachman finished with 11 points for Jemison in a losing effort.

Central will move on to face Helena in the Class 5A Area 7 Championship Game on Friday at Helena High School.

The rest of Tuesday’s boys action included Thorsby defeating Fayetteville 76-40 in the semifinal of Area 9-2A, while Maplesville lost to 63-59 to Autaugaville in the Area 6-1A final and Verbena suffered a 66-48 loss to Loachapoka in a semifinal in Area 7-1A.

The Isabella girls basketball team clinched a spot in the Sub-Regionals with a 58-44 victory over Ellwood Christian in the... read more