Authorities on Thursday were still searching for a Chilton County male who escaped custody.

Shayne Allyn Varden, 25, from escaped the back of a Chilton County Sheriff’s patrol car on Tuesday.

Assistant Chief Deputy Shane Mayfield with the Chilton County Sheriff’s Office said authorities responded to a disturbance call where they encountered Varden, who was allegedly in possession of methamphetamine and drug paraphernalia. 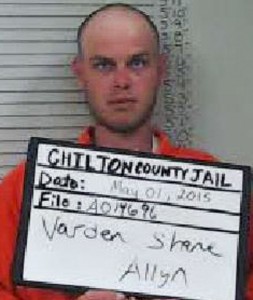 Deputies handcuffed Varden and placed him in the back of a patrol car, and went to deal with the rest of the individuals involved in the incident.

When deputies returned to the vehicle, they found Varden had escaped.

Mayfield said they are unsure how Varden was able to escape out of the vehicle.

Varden was not armed at the time of his arrest.

Deputies searched around County Road 254 after his escape on Tuesday but were unsuccessful in locating him.

Varden is described as 5 feet 9 inches and 169 pounds with brown hair and blue eyes.

Mayfield said Varden is not considered dangerous and does not have a violent crime history.

“We are just trying to see if anyone can help us out on a location for him,” Mayfield said.

Anyone who sees Varden, or has information about his whereabouts, is encouraged to call the sheriff’s office at (205) 755-2511.