It took a late-game comeback, but the Jemison varsity girls basketball team knocked off host Chilton County High School 47-44 on Jan. 29.
Cassani Steele put the first points of the game on the board, but a free throw from Kaley Lucas and a basket from Lexis Blackman quickly put the Tigers ahead by one in the early going.
Another basket and a pair of free throws by Lucas grew the Tigers’ lead to five.
Blackman added five more points and gave CCHS a 12-5 lead at the end of the first quarter.
However, the Panthers fought back with four straight points by Steele, which cut the deficit to three. 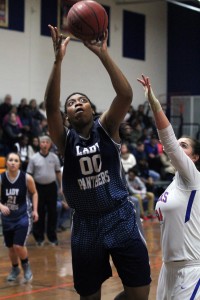 Cassani Steele posts up against Salena Stoneback. Steele finished Jan. 29 with a double-double of 26 points and 17 rebounds. (Photo by Brandon Sumrall)

Another basket by Blackman put the Tigers’ lead back to five, as the two teams exchanged baskets through the closing minutes of the second period.
CCHS maintained a 20-15 lead heading into the half.
The Tigers built a nine-point cushion through the early seconds of the third period, but a three-pointer from Karmen Mims and a basket from Steele cut the Tigers’ lead to four.
Steele shrunk the lead to two, and it was cut to a single point following a free throw by Taylor Ray.
Blackman put the Tigers up by three, but a free throw by Erristen Evans and two from Marie Flores tied the game at 24-all.
With 2:34 to play in the third period, Sweet Davis gave CCHS a two-point lead that carried through the remainder of the period, as the Tigers took a 28-26 lead into the fourth.
The Tigers built a 10-point lead through the early minutes of the period, but the Panthers began to chip away with 4:31 left to play.
A basket by Evans cut the lead to eight, and Steele began to take over the game by pulling the Panthers within two of the lead.
Zanquese Stone eventually tied the game at 40, and seconds later Steele put Jemison out in front for good.
Steele led the Panthers with a massive performance that included 26 points, 17 rebounds, two steals and a block.
Blackman’s versatility led CCHS with 26 points, eight rebounds and three steals.

By Brandon Sumrall | Special to The Advertiser The 2015-2016 basketball regular season came to a close on Jan. 29... read more