Flutter 2016 continues to spread the word 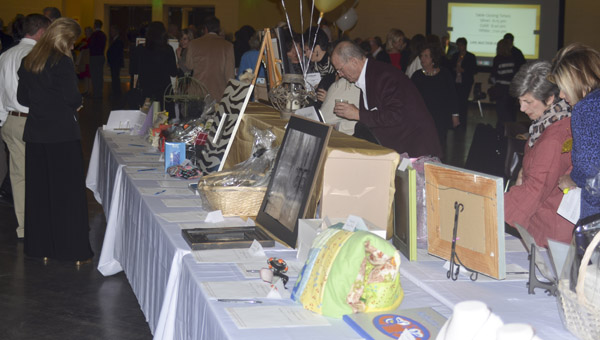 A table full of items gets looked over by event attendees during the silent auction portion of Flutter 2016 on Feb. 4. (Photo by Anthony Richards / Advertiser)

It was the third annual Flutter event and took place on Feb. 4 at the Clanton Conference and Performing Arts Center at Jefferson State Community College.

“Every year we’ve had more and more people,” Executive Director/Child Forensic Interview Specialist Jana Zuelzke said. “We had about 175 last year, and this year we looked to have at least 250. We are very excited about that.”

The money was raised during a silent auction that was followed by a live auction with Superintendent of Education Tommy Glasscock serving as the auctioneer.

“It’s wonderful to attend and you don’t mind spending more, because you know where the money is going,” attendee Kathy Zuelzke said. “It just makes you feel good.”

The proceeds will go toward filling the needs of the center and helping the organization to maintain and grow its influence within the community.

“We had an overwhelming amount of donations of gifts from individuals and buisnesses,” Jana Zuelzke said. “We got such a variety and there’s something for everybody.”

The Jemison Culinary Arts program catered the European food, while Country Lane Too Catering provided the American and Cajun food.

“I dealt a lot with Butterfly Bridge and the services that they provide to children,” volunteer Brandon Bates said. “I just got involved, and it has been something that my wife and I have continued to be passionate about.”