The basketball playoffs are in full swing with area tournaments underway or about to begin this week.
The Thorsby girls basketball team is the lone Chilton County school hosting a tournament.
As the No. 1 seed in Area 9-2A, the Rebels have already secured a spot in the title game and will await the winner of Fayetteville and Vincent.
The Thorsby boys will play Fayetteville in a semi-final matchup on Tuesday at 6 p.m. With a win, the Rebels will advance to play host Vincent at 6 p.m. Thursday.
Isabella’s girls basketball team enters postseason play in rhythm after ending the regular season on quite a run.
The Mustangs were scheduled to face Ellwood Christian in the Area 5-1A semi-finals on Monday night, a team that Isabella had already defeated twice this season. 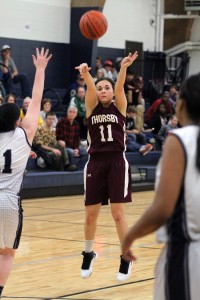 Thorsby’s Lilly Barnett shoots during a game earlier this season. She is one of the many reasons why the Rebels enter as the top seed in the Area 9-2A tournament. (File)

A win would advance Isabella to the area final against host Keith at 5 p.m. on Wednesday.
Unfortunately for the Mustangs’ boys varsity squad, it has been a difficult and winless season, as Isabella continues to search for its first victory in the Area 5-1A semi-finals scheduled Monday against Ellwood Christian.
Elsewhere in Class 1A, the Verbena boys basketball team will square off against Loachapoka on Tuesday at 5:30 p.m., while the girls squad was scheduled to play Notasulga on Monday.
With victories, the Red Devils would advance to face host Loachapoka on Wednesday at 7 p.m. in girls’ action and host Notasulga in the boys’ final on Thursday at 7 p.m.
Chilton County High School and Jemison High School battled for the county title on the boys’ side earlier in the season, and now both teams will look to cement their spots in the Sub-Regionals.
Jemison will play Central Tuscaloosa at 5:30 p.m. on Tuesday.
CCHS prepares to face host Paul W. Bryant High in Tuscaloosa on Thursday at 7:30 p.m.
If both teams win, Jemison will play the winner of host Helena and Calera Friday at 7 p.m., while the Tigers would square off against the winner of Selma and Hillcrest at 7:30 p.m. Saturday.
The girls’ varsity teams for Jemison and CCHS will have an uphill battle as they each play the host squads to begin the area tournament.
The Panthers were scheduled to face Central Tuscaloosa on Monday, while the Tigers will battle favorite Hillcrest in Tuscaloosa on Tuesday at 6 p.m.
If the teams pull off the upset bids, Jemison will play the winner of Helena and Calera at 6 p.m. Wednesday, and CCHS would face either Paul W. Bryant or Selma at 7 p.m. on Friday.

By Brandon Sumrall | Special to The Advertiser It took a late-game comeback, but the Jemison varsity girls basketball team... read more