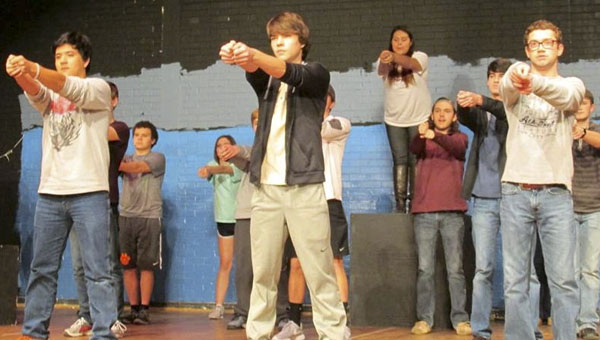 The 2016 Chilton County High School “Blast from the Past” is just a few weeks away, and students are working hard on the songs and dances they will perform this year.

Any cast member can also purchase tickets for those interested in attending.

On Saturday, Rick and Sheri McKee, who spearhead the program, will be selling tickets from 10 a.m. until 2 p.m. at the CCHS auditorium.

There are 126 kids involved in Blast from the Past, a concert program and fundraiser that supports CCHS.

The first Blast was held in the early 1990s, and the McKees led it for 18 years before Paige Scruggs led it for three years.

The McKees missed interacting with the students and later returned, and will now enter the 24th year of the production.

Songs in the 2016 program include the following tunes: “You Give Love a Bad Name,” by Bon Jovi; “Blue,” by LeAnn Rimes; “Spice Up Your Life,” by the Spice Girls; “Then He Kissed Me,” by The Crystals; “Dock of the Bay,” Otis Redding; “I’m Gonne Be (500 Miles),” by The Proclaimers; “When Will I Be Loved,” by Linda Ronstadt; “Piece of My Heart,” by Janis Joplin; “1-2-3,” by Gloria Estafan, “Walk Like An Egyptian,” by The Bangles, “Listen To Your Heart,” by Roxette; “Tan Shoes and Pink Shoelaces,” by Dodie Stevens; “Proud Mary,” by Ike and Tina Turner; “Love Potion No. 9,” by The Searchers; “I Know There’s Something Going On,” by Frida (ABBA), “Any Man of Mine,” by Shania Twain; “Downtown,” by Petula Clark; “It’s Raining Men,” by The Weather Girls; “On The Road Again,” by Willie Nelson; “A Brand New Me,” by Dusty Springfield, “Stand By Me,” by Ben E. King; “I Love Rock and Roll,” by Joan Jett and The Blackhearts; “Anyway,” by Martina McBride and “Get Off My Cloud,” by the Rolling Stones.

The repaving project on County Road 42 started on Thursday. Motorists traveling along one of Jemison’s main thoroughfares are encouraged... read more