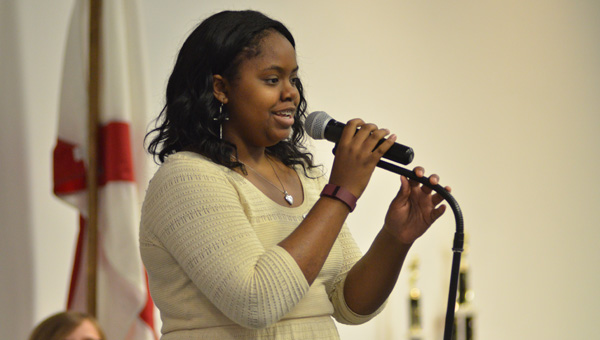 “Temerity” means “excessive confidence or boldness,” but instead it was hard work that allowed Sarah Beth Huntley to win the Chilton County Spelling Bee on Wednesday.

Huntley then had to spell “plaintiff” to claim the Spelling Bee championship. 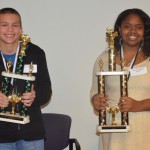 Top spellers: Huntley (right) was the winner of the bee, and Kyle Tillery of Maplesville was the runner-up.

Huntley said most of her preparation for the bee was performed through an application on her smart phone.

“If I wasn’t doing anything else, I would work on my words,” she said and also thanked her mother for practicing with her.

Huntley was one of seven spellers, each representing a school in Chilton County, that competed Wednesday at the Alabama Power Conference Center.

Huntley got off to a shaky start, as she misunderstood the word “balm” and instead spelled “bomb.”

After taking a seat in the audience as if eliminated from the competition, Huntley was allowed to return to the front because it was deemed a disruption could have contributed to the misunderstanding.

The first set of words given to spellers was considered a practice round since there was trouble with the sound system. A new microphone was being brought in when Huntley missed “balm.”

She said she had little trouble the rest of the way.

“Other [words] that I wasn’t sure about, I would just ask for the definition,” Huntley said.

The other contestants, not including Huntley and Tillery, were Campbell Easterling of Clanton Intermediate School, Logan Forbach of Jemison Elementary School, Nathan Quesenberry of Jemison Middle School, Jack Fitch of Thorsby School, Madison Davis of Isabella and Cheyann Barchard of Verbena. 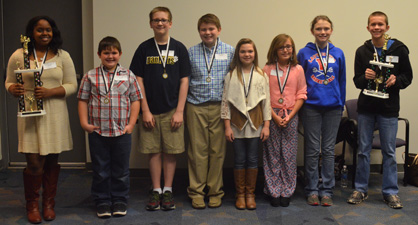 Spelling bee competitions are open to students in grades 3-8.

The official first word of the day was “silent.”

“Length” was the first to trip up a contestant. In the seventh round, “moxie” sent a contestant to their seat, and in the 10th round, “owlishly” and “hoity-toity” both proved too difficult.

“Jargon” eliminated another contestant in Round 12, and in Round 13 it was “fulfilling.”

Huntley said she planned to give her trophy to first-year CMS spelling bee coach Thomas Hughes.