The 2015-2016 basketball regular season came to a close on Jan. 29 as the Chilton County High School Tigers played host to rival Jemison.

The Tigers’ varsity boys team cruised to a 67-34 win, as Tolliver Gilliland and Austyn Ray gave the Tigers an early 4-0 lead.

However, Ryan Thompson and Mathew Ramsey cut that lead to two, but Damian Wilson and Keshawn Williams extended the Tigers’ lead to nine points and 14-7 in favor of CCHS after one period.

Three points from Wesley McGehee started the second quarter and pulled Jemison to within a four-point deficit. 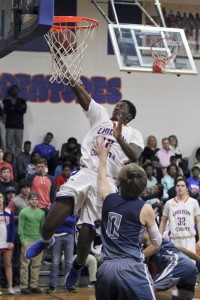 Mondez Jones of CCHS maintains his concentration while contact is initiated by Jemison’s Ty Leachman on Jan. 29. (Photo by Brandon Sumrall / Advertiser)

Jaquarius Martin made a basket and ignited 6-0 scoring run by the Tigers.

A basket from Tremon Bryant cut the Tigers’ lead to five, but six points from Martin yet again in the closing minutes gave CCHS a 29-18 lead at the half.

Bryant knocked down a long-range shot just 30 seconds into the third quarter.

Those were the only points the Panthers could muster during the period.

Mondez Jones answered with a basket for the Tigers and started a 14-0 run that pushed the Tigers in front 43-21 entering the final quarter.

With the game comfortably in hand, the Tigers played deep into their bench, and with under two minutes to play, Garrett Strength drilled a pair of three-pointers that put the icing on the cake for the CCHS seniors.

The win sent the senior class off the court for the last time with a convincing victory over their biggest rival.

Martin led the Tigers with 17 points, 11 rebounds, one steal and two blocks, while

Mason Jones led the way for the Panthers with 11 points, five rebounds and one steal.

CCHS began the night with a 50-16 B-team victory following a slow start for both teams.

A basket from Reshaun Davis of CCHS was the only points for either side through the first three minutes before six points from Joey Cleckler fueled a 10-0 scoring run to close out the first period for the Tigers.

Keundae Childers and Tyler Williams extended Chilton County’s lead to 14 points before Kaleb Bane put the Panthers on the board with one shot from the free throw line.

Bane acounted for all the Panthers points during the second period, but it was not enough to keep pace, and the Tigers led 26-3.

Giquon Lane started the third quarter with a three-pointer for the Tigers, but was answered by a pair of baskets by Ryan Smith.

Drue Moore added another basket for the Jemison. However, the Tigers took a 35-9 lead into the final period.

A pair of treys by Adam Keenum and Cleckler along with a pair of baskets from D’Vontae Williams eventually summed up a long night for the Panthers.

Cleckler led the Tigers with 11 points, 10 rebounds and three steals, while Moore led the Panthers with eight points, six rebounds and a steal.

The Craig Hunnicut scholarship was awarded to Isabella senior Caley Booth on Jan. 9 during halftime of championship action at... read more