Points are hard to come by for CCHS

The Chilton County High School Tigers had a tough go of it on Tuesday night as the Hillcrest Patriots of Tuscaloosa knocked off the Tigers at home. The varsity girls lost 56-15, while the varsity boys suffer 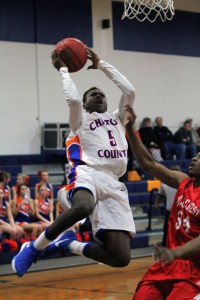 Keshawn Williams of CCHS hangs in the air prior to converting layup at home against Hillcrest on Tuesday night. (Photos by Brandon Sumrall)

The Lady Tigers kept things close through the early minutes of the first period and trailed by only one point.

However, an 8-0 Patriots run gave Hillcrest a 16-7 lead at the end of the first period.

The Tigers continued to struggle through the second period, as CCHS did not score a basket in the period, and the Patriots extended their lead 37-7 at the half.

After a 30-0 run, Salena Stoneback finally ended the run with a basket from the free throw line, and Kaley Lucas added another.

Six more points from the Tigers in the closing minutes of the period brought the score to 50-14 in favor of Hillcrest after three periods of play.

With the Patriots leading by 36 and the clock running during the fourth period, just one point for the Tigers and six for Hillcrest were added to the board.

The varsity boys faired no better, as the Patriots jumped out to an early lead and never looked back.

Kyler Garth sank a basket for the Patriots just seconds into the game and started a 19-0 run for Hillcrest that was not ended until 12 seconds were left in the period.

That is when Keshawn Williams brought the run to an end and put the Tigers on the scoreboard. 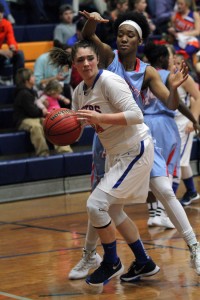 Salena Stoneback of CCHS looks for a passing lane with a Hillcrest defender bearing down.

At the end of one period the Patriots held a 19-2 lead.

Jequaries Martin started the second period with a basket for the Tigers, but nine unanswered points by the Patriots.

William Hodges and Joshua White exchanged baskets to make the score 33-9, but six more points by Hillcrest gave the Patriots a 39-9 lead at halftime.

Damian Wilson and Hatch started the third period with a pair of baskets for the Tigers and cut the deficit to 41-15.

The best period of the game for the Tigers was matched by the Patriots, which closed out the period and led 56-24 at the end of the third quarter.

The fourth period had a running clock, as the Patriots led by 32.

Hillcrest outscored the Tigers 13-9 in the period and came away with the area win over the Tigers.

Hatch led the way for the Tigers with 10 points and three rebounds.

Isabella girls soaking in the victories

Isabella not only defeated Billingsley 52-25 in front of the home crowd on Monday, but they had fun doing it.... read more