The Craig Hunnicut scholarship was awarded to Isabella senior Caley Booth on Jan. 9 during halftime of championship action at the 2016 Chilton County Basketball Tournament. 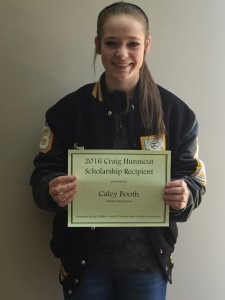 Isabella’s Caley Booth poses with the Craig Hunnicut scholarship certificate that she received on Jan. 9 during the Chilton County Basketball Tournament. (Contributed)

It is an annual scholarship presented by the Chilton County Principals and Coaches Association and given to a child of a coach or principal at a school within the community.

“I was very honored, because any money can help for college,” Booth said. “I’ve gotten a variety of awards, but this one ranks pretty high.”

This holds significant meaning because she is the daughter of current Isabella athletic director Scott Booth, and the scholarship is in honor of Craig Hunnicut, who the athletic field house at the school is named after.

“He was one of my daddy’s close friends,” Booth said. “He is a big name around here, and people definitely look up to him.”

According to Booth, Hunnicut battled with what they thought was ALS but ended up being Lyme disease. However, it was caught too late and he could not recover from it.

Booth is deeply involved in the Mustangs’ program by playing a variety of sports as well as cheerleading.

After most basketball games, she makes the quick change from her basketball uniform to a cheerleading uniform and then roots on the boys squad.

Her support for the school plays a vital role in what she is as a person, and nothing less is expected from the daughter of a coach.

“He is very proud of the things that I’ve done and my work ethic,” Booth said about her father. “Him being a coach never really effected what I did. I loved to play sports.”

Jemison boys get back on track against Isabella

It did not take long for the Jemison varsity boys’ basketball team to re-establish its groove with a 57-30 victory... read more