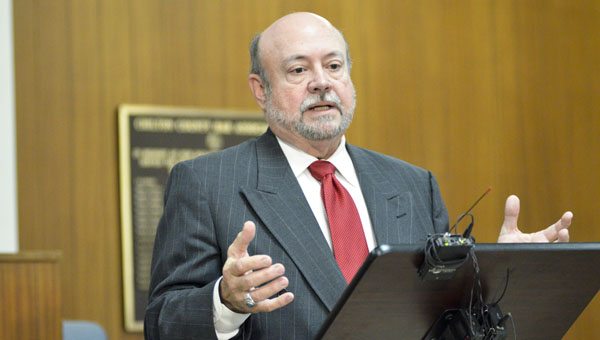 District Attorney Randall Houston speaks to the media during a press conference Wednesday morning. Houston released new evidence regarding a shooting on Jan. 23 where a Chilton County man was killed by law enforcement. (Photo by Stephen Dawkins)

Authorities say the use of deadly force on a man fatally shot by law enforcement officers in Chilton County on Jan. 23 was justified.

During a press conference Wednesday morning at the Chilton County Courthouse, District Attorney Randall Houston shared details of the shooting that happened on Saturday at County Road 701 in Chilton County.

“I am satisfied that the use of lethal force was justified in this situation,” Houston said.

Houston said officers with both the Chilton County Sheriff’s Office and the Clanton Police Department were called to the residence around 12:57 p.m. on a report of domestic violence. 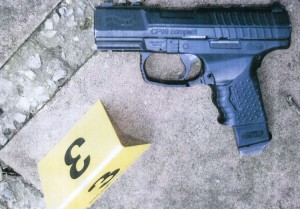 The pistol that Michael Robinson pulled out in front of officers ended up being a pellet gun that looked to be a replica of a Walther CP99.

Houston said when the officers arrived at the scene, they found Michael Lamar Robinson, 43, brandishing a sword or machete.

As officers instructed Robinson to drop the weapon, he allegedly pulled what officers thought to be a pistol from his right side.

Houston said Robinson raised the gun roughly three-quarters of the way to full point when the officers shot him.

“As he raised the gun toward the officers, they responded with deadly force,” Houston said.

Houston would not say how many officers fired at Robinson or how many times Robinson was shot, and said the State Bureau of Investigation is continuing to investigate.

Houston also did not specify if the officers who fired at Robinson were employed by the CPD or sheriff’s office.

Houston did say that the officers who shot Robinson had been put on administrative leave, pending the outcome of the investigation.

Houston said the pistol that Robinson pulled out in front of officers ended up being a pellet gun that looked to be a replica of a Walther CP99.

“The gun appears to have a barrel similar to a semi-automatic,” Houston said. “When officers are under a stressful situation at 25 to 30 feet, there is no way they could have known it was a pellet gun.”

Houston said the video footage of the incident has been turned over to SBI, SBI will release the video after the investigation, and authorities will show it to Robinson’s family.

Houston said in reviewing the video, there was a verbal exchange between Robinson and the officers.

“The goal of the officers was to get him to put down the weapon,” Houston said.

Houston attributed the fact that body cameras were used during the incident as the best piece of evidence.

“The fact that we have video is the best thing we can have,” Houston said. 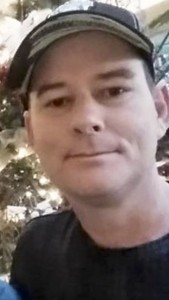 Houston said SBI is continuing the investigation and no additional information about the incident was available.

After the press conference, several members of Robinson’s family stood outside of the courtroom.

Robinson’s cousin, Wayne Caton, spoke to members of the media about Robinson, who he described as a “good man and dedicated family member.”

“He would help anyone,” Caton said. “He has two adult children, and the family is grieving at this time.”

When asked if the family was satisfied with the details coming forward about the incident, Caton said the family is “deeply concerned.”

“We don’t want to comment on the investigation, but the family is just deeply concerned,” Caton said.

Robinson was originally born in Texas, but lived in Clanton and was the son of the late Willie Lee Robinson and Cheryl Cash Robinson, according to his obituary.

He was employed in construction, and married to Carla Robinson of Clanton, and had a daughter, Amber Bowman (Matthew) of Clanton and a son, Alex Robinson (Marisa) of Haleyville.

A visitation was scheduled for Wednesday from 5-7 p.m. at Martin Funeral Home.

Funeral services are scheduled for Thursday at 1 p.m. at Martin Chapel with the Rev. William Kee officiating.