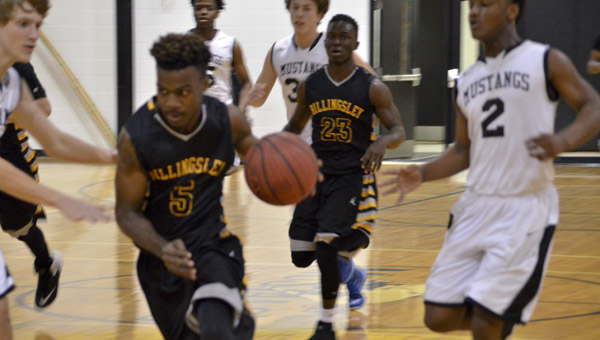 The Billingsley Bears outlasted a gritty performance by Isabella and denied the Mustangs its first win of the season with a 42-34 road victory on Monday.

Both teams were held under 50 points, as defense reigned supreme throughout the contest.

Billingsley was able to establish a rhythm early on following back-to-back treys by senior Alex Cobb, which gave the Bears a 13-7 lead at the end of the first quarter.

Isabella went on a scoring run of its own, as Jaqarise Stacy drove coast-to-coast for a layup and Michael Mathis stole a pass and scored on a breakaway basket to beat the buzzer and cut the deficit to five heading into halftime.

“We started making shots, and that’s what kept us in the game tonight,” Isabella point guard Jarred Campbell said. “We just played better as a team. Everybody’s just young and learning as we go.”

Isaac Green asserted his presence on the offensive boards in the second half and as a result found easy points under the basket.

“Rebounding is the main part of my game,” Billingsley senior Isaac Green said. “If I can’t score, you can count on me to rebound.”

The Bears grew their lead to double digits on several occasions, but each time Isabella fought back and shrunk the margin.

However, the Mustangs never closed the door on the comeback and Billingsley sealed the deal with free throws down the stretch.

“We found a way to win,” Billingsley head coach Tyson McLean said. “We’ve still got a lot of learning to do, but we needed a win to get our confidence back. It’s always easier to teach after a win.”

Green finished with a game-high 12 points, while Mathis led Isabella with seven points.

The focus now turns to the area tournament and the opportunity to get hot at the right time.