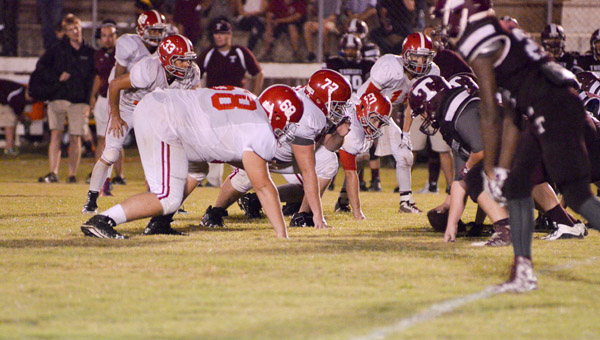 Thorsby and Verbena faced each on the football field in 2015. Next year it will be a region game after the AHSAA’s most recent re-classification on Wednesday. (File)

The re-classification process was completed on Wednesday by the Alabama High School Sports Association, as the regions for all seven athletic classifications have been set for the next two academic years.

Of the approved changes, several local teams were involved in the shakeup.

“I don’t think that there is a big difference from [Class] 1A and [Class] 2A between the top teams,” Billingsley football coach Tyson McLean said. “Making a deep run in the playoffs is still going to be our goal whether we’re 2A or 1A.”

Region 4-2A will be the most crowded in terms of county teams with Aliceville, Francis Marion, Keith and R.C. Hatch occupying the rest of the region.

“We were in the same region with Verbena last year, so I don’t see that affecting us a whole lot,” McLean said. “A good thing is that it gets us playing Thorsby again.”

Despite being close in proximity to each other, Maplesville and Isabella have not met on the gridiron since 2007.

That streak will come to an end in 2016, as both teams will be competing in the same region for at least the next two seasons.

Joining Maplesville and Isabella in Region 3-1A will be Autaugaville, Ellwood Christian, Highland Home, Loachapoka and Notasulga.

Chilton County High School remained a member of Class 6A and will once again be near the bottom in enrollment.

The Tigers have the second lowest enrollment in the classification with 602 students. Florence High School has the most in Class 6A with 1,067 students enrolled.

“I know there are some teams that are unhappy about it, but I’m easy-going,” CCHS football coach Brian Bradford said. “There’s two ways to respond: you either get mad or go along with it. We’re going to give it everything we’ve got and just let the chips fall where they fall.”

It will be in region 3-6A along with Benjamin Russell, Chelsea, Helena, Opelika, Pelham and Wetumpka.

“There’s no weak teams on our schedule, and everybody you play you’ve got to give your best or else they will beat you and make you look bad,” Bradford said. “It’s tough but we want that challenge.”

Jemison High School remained in Class 5A but will now be in football Region 3. The only difference in its region is Marbury taking the place of Wilson Central, as the rest of the teams remained the same from a season ago.

By Brandon Sumrall | Special to the Advertiser The basketball leaves the finger tips of Maplesville’s Terence Dunlap (left), as... read more