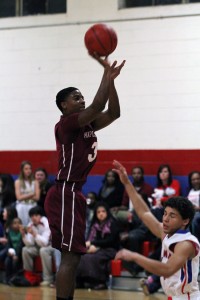 The basketball leaves the finger tips of Maplesville’s Terence Dunlap (left), as he shoots over Anthony Miller of Verbena on Thursday night. (Photos by Brandon Sumrall)

A battle of the Red Devils resulted in both Maplesville and Verbena coming away with a win on Thursday night, as Verbena’s varsity girls squad picked up a 36-16 win while the Maplesville varsity boys ca

The teams would go basket-for-basket through the early minutes of the first period, as Hakeem Underwood and Nathaniel Watson made it 2-all.

Tristan Short and Dorrian Parker gave Verbena a four-point lead, but Watson and Terence Dunlap again tied the game, this time at 6-all.

Underwood and Parker gave Verbena another four-point lead, but three points from Daryl Odom made it a one-point Verbena lead after one period of play.

Jacob Cleckler dropped a three-pointer just seconds into the second quarter, but a basket from Dunlap was followed by back-to-back three-pointers from Odom to lead a 9-0 Maplesville run.

A basket from Miller with 30 seconds to play in the first half cut the lead to eight, but Maplesville led 27-19 at the half.

Harrison and Dunlap led a 7-0 Maplesville run to start the third period that was brought to an end on a basket by Parker.

However, Dunlap answered right back, and a basket by Watson gave Maplesville a 38-21 lead.

Four points from Parker and Tyus cut the deficit to nine, but four points from Harrison and a basket from Stevonta Bradley extended the Maplesville lead 44-29 after three periods of play.

Parker and Dunlap exchanged baskets to start the fourth quarter, but Maplesville still led 49-31 with less than 5 minutes to play. 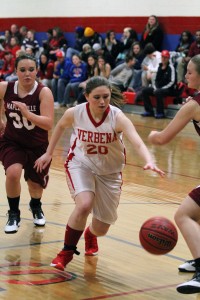 Verbena’s Taylor Barrett (center) weaves through traffic as she approaches the basket during the Red Devils’ win over Maplesville on Thursday.

Tyus and Parker cut the lead to 15, but a three-pointer from Jeremy Williams and Eric Bailey along with a free throw from Harrison made it 58-34.

Three more points from Miller and a basket from Loftin Smith brought the game to its final outcome, as the Maplesville Red Devils out-performed their counter part.

JaNiya White led the Verbena girls’ effort with 14 points while Tayuna Watson led the way for Maplesville with eight points.

By Brandon Sumrall | Special to The Advertiser The Verbena Red Devils varsity boys and girls each picked up area... read more