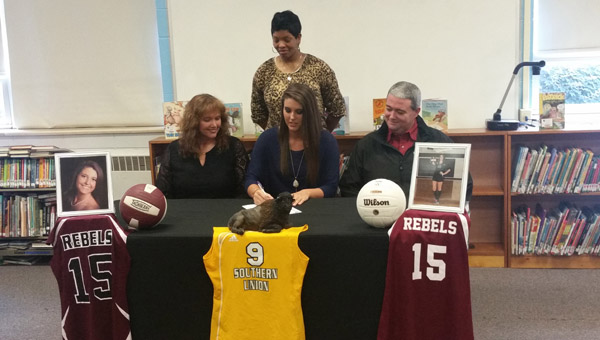 Her family and friends were there to witness the signing and soak in the emotions of the day.

“I had butterflies all week,” Ellison said. “It hasn’t set in yet that I am a college volleyball player.”

She began playing volleyball in seventh grade with her former coach Ginger Williams helping introduce her to the sport.

“I got to create sisters,” Ellison said. “There were many times that we all laughed and shared a good time.”

According to Ellison, it was during her junior year that she started realizing that playing college ball was a reality if she put in the hard work.

“She has always worked extra hard to be the best that she can be,” Thorsby coach Desiree Evans said. “She really shined in a leadership role. It came natural for her.”

Ellison showcased her skills as a volleyball player during tryouts at the SU Sports Arena at the campus in Wadley.

According to Ellison, the first tryouts took place in December 2015 with 52 players attending. It was then shorten to 16 and a follow-up tryout was held in January.

“I’ve been with her since she was in eighth grade,” Evans said. “As a ninth grader, you could tell even though she was so young.”

After both tryouts, Ellison made the final cut of 10 players that were selected to be members of the team.

“It is really a proud moment because I have seen her grow up,” Evans said. “It is really an overwhelming experience because she has worked so hard and has finally made it.”

Wasting away: The old Thorsby school was built in 1925 and closed in 1975. It has sat largely unused since... read more