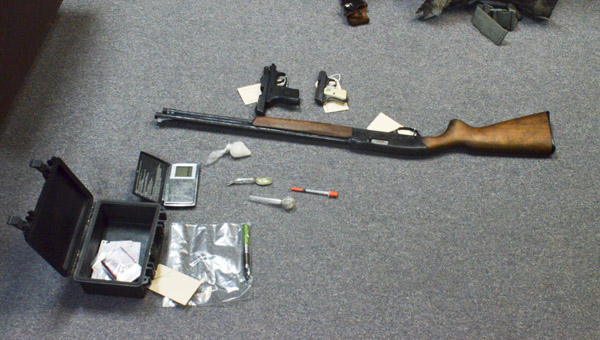 The possessions seized by the Maplesville Police Department after a suspicious vehicle resulted in three arrests on Jan. 5. (Photo by Anthony Richards)

The Maplesville Police Department seized 39 grams of methamphetamine along with two pistols and a rifle, while three suspects were arrested at 12:37 a.m. on Jan. 5.

The arrests were made after a vehicle pulled over into the parking lot of a fuel station and blocked several parking spots, while the driver left the motor running and went inside the convenience store.

Two more people remained in the vehicle during this time.

“They left it running while blocking several parking spots,” arresting officer Ken Casey said. “There was all kinds of stuff in the back of the truck, and there had been some reports of thefts out of Bibb County, which was kind of curious.”

Casey ran the tag and the vehicle came back with a warrant. He approached the driver as he came out of the store and checked the licenses of all the occupants in the car, each of which had warrants connected to them.

“One of them had a syringe on them and admitted to shooting up earlier with meth,” Casey said. “We started looking through it and found three guns along with the drugs.”

Trilliam Apartment Complex in Clanton has two open houses scheduled this week for those in the community wanting to find... read more