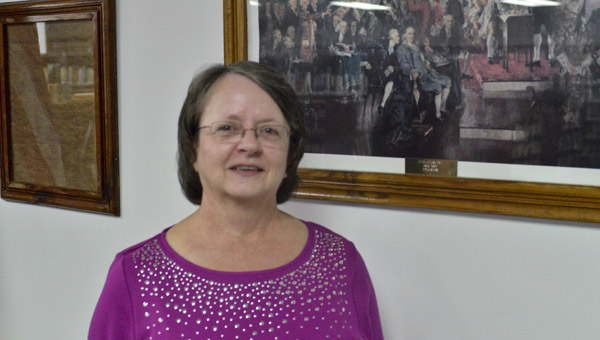 Sheila Haigler was appointed as the new member of the Maplesville Town Council. She will take over for Hal Harrison and represent District 1. (Photo by Anthony Richards)

Sheila Haigler was unanimously approved to fill the vacancy left after the departure of Hal Harrison and become a member of the Maplesville Town Council during Monday’s monthly meeting.

“I have had a lot of people ask me all the time to run for an office,” Haigler said. “They trust me or else they wouldn’t be asking me that.”

Haigler will take over representation of District 1, after living in Maplesville and the district for the past 48 years.

“In a small town, you don’t look at it as a district, because it’s the town as a whole,” Haigler said. “We’re here for everybody and responsible for the entire town.”

She spent time as the town clerk for just over nine years before retiring about two years ago.

“When I retired, I told them that I would be back in some capacity,” Haigler said. “I feel that because I have worked here and have the experience, I can fall back into it fairly easy.”

Due to Haigler’s prior experience in the town government setting, she believes that she has the background to help benefit the town council.

“I plan on making this a permanent thing to be involved in the town’s business whatever office I run for,” Haigler said.

After Haigler was sworn in and took her seat at the table, the meeting began with Sheila Hall as the only member absent.

Police Chief Todd Ingram informed the council that the insurance company sent a check for $11,370 for the damages that occurred to a 2010 Dodge Charger during a police chase on Dec. 27. The car was totaled.

Haigler asked as to why the police department had not been submitting weekly reports to The Clanton Advertiser. She stated that it would better inform the citizens of what crimes to be aware of in community.

According to Ingram, the department was short staffed for a period of time and that was the reason for not remaining up to date with the police reports.

Fire Chief Michael Drewry updated the council on the continued search for a replacement fire truck. Since the last meeting on Dec. 14, Drewry had not heard back regarding a possible truck in Pennsylvania but was able to find a truck in Tennessee.

In order to own the truck, the town would have to bid on it. Haigler questioned if the truck was on the state’s bid list and therefore would not have to go through the bidding process.

Mayor W.C. Hayes Jr. wanted to know the amount that the council would approve to bid for a bucket truck.

Haigler presented the question of whether it would be cheaper to rent instead of buying one. It will be looked into and reexamined at the next meeting on Feb. 8.

Prior to the meeting coming to the end, Hal Harrison was recognized for his four-year service on the council. He received a wood carving of the state of Alabama with a star painted on it to represent Maplesville’s location.

•Up to $500 was approved for installation of Microsoft Office and Home 2016 on three of the four new computers in the library. One copy had already been purchased.

The possessions seized by the Maplesville Police Department after a suspicious vehicle resulted in three arrests on Jan. 5. (Photo... read more