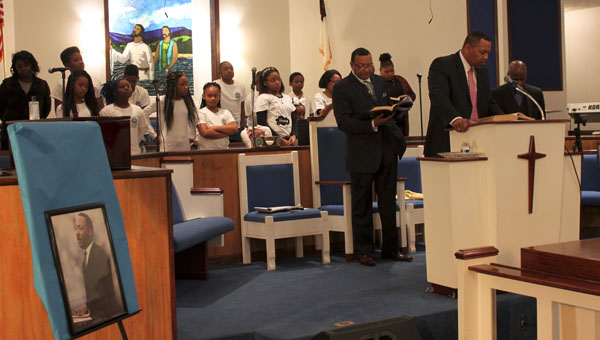 The event was sponsored by the Alabama Democratic Conference and featured children from Morningstar and surrounding churches performing songs, prayers from local leaders, and a message from guest speaker and Morningstar’s pastor, the Rev. Roman C. Nix.

The emcee for the event was the Rev. Kenneth Allison, an opening song was given by Olivia Washington, Morris Bryant welcomed the visitors and

“In many ways Dr. King’s, ‘I Have a Dream’ speech has become a reality,” DeJarnett said. “It may not be all the way there, but we continue to work toward that.”

Warene Chaney provided an “occasion” and the youth sang a song before Nix spoke to the congregation.

Nix said oftentimes when God brings an individual out of a situation, it is because he wants to teach that individual something.

“We have made many strides throughout the years,” Nix said. “But, there is still work to be done.”

The service concluded with several songs performed by children from Morningstar, and the Pledge of Allegiance.

An “old-fashioned” breakfast was held immediately after the service at the church.

Other area churches have participated in and hosted the Prayer Breakfast in previous years.