Recently I went with Mrs. Sherry Smith to the beautiful and active Senior Center that is situated in the old train depot in Maplesville. I was introduced to 99-year-old Mr. Raymond Oden, who was a member of that center.

Oden was born in Chilton County to Eunice Oden on Aug. 19, 1916 within 100 yards of the Isabella Post Office in a small section called Jones Town. His father left the family shortly after returning from World War I so his maternal grandfather, William M. Oden, adopted him. 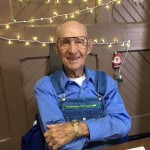 Lasting memories: Raymond Oden was born in Chilton County in 1916, within a hundred yards of the Isabella Post Office in a community named Jones Town. (Photo by Scarlett Teel)

Raymond Oden was 12 years old when his mother died, leaving him entirely in the care of his adoptive grandfather and his step grandmother. Raymond’s grandfather after returning from World War I ran a farm and a country store. He also served as a Justice of the Peace for the area.

Raymond enjoyed his school years at Isabella, where he finished in 1936. He told of the good friends and baseball teams at school that consisted of “Monroe and Douglas Hayes, Van Potts and Dr. Nix’s son.”

Raymond had an uncle, Paul Oden, that attended the Talladega School for the Blind and was very influential on him. Through the years of the 1930s and the 1940s, Paul Oden lived in the Willingham Hotel in Clanton where, Raymond assisted his blind uncle so that he could travel over the county for Baptist Association Meetings.

Raymond married Mrs. Gladys Gaydon Oden, and together they had seven children, all of whom are still living. Before her death, Mr. and Mrs. Oden were married for 74 years. For seven years, Mr. and Mrs. Oden lived in Louisville, Ky., within sight of Churchill Downs while Oden was in the insurance business. Later, the insurance company moved him to Birmingham for 30 years.

Down through the years Raymond Oden remembered very vividly the town of Maplesville and the area. He remembered a hotel being run by Mr. Fox, a big sawmill, a business that processed leather and made shoes, a business that used a special wood—perhaps dogwood—to make spools for thread, and the Grahams, who started planer and saw mills in Maplesville.

Many of the town’s people lived off the timber industry or farmed so the town supported two hardware stores, two grocery stores and two cotton gins. Raymond remembered Cal Foshee operated a cotton gin and a store that had caskets to sell from the back. There were two doctors—Dr. Parnell and Dr. Dubose. Dr. Dubose grew up in Maplesville and then went to Selma, where he started a hospital.

He remembered the Maplesville Post Office being run by Jake Wallace and going to the Maplesville Wadesonian Theater to see the lengthy movie “Gone With the Wind.” He and his family spent one night in the Maplesville Hotel due to the roads being so muddy along the few miles between there and their home. He also remembers there being a Greyhound bus station serving the town of Maplesville.

Raymond Oden remembers as a youngster coming to Clanton to see Dr. Joe Johnson, the father of Dr. Joe Hall Johnson, to have his tonsils and adenoids removed in the office of the doctor. It took almost the entire family to hold him down for Dr. Johnson to do the surgery!

Afterward, the family stopped by the home of Mr. and Mrs. Crit Jones, the uncle of his mother, for Raymond to further recuperate before continuing on to Maplesville and home.

Raymond Oden will smile and tell you that he has the finest children and grandchildren in the world and that he is very proud of them, but he also will, perhaps, tell you of something else that makes him very proud. Recently, Mulberry Baptist Church gave him a plaque designating that he is now one of their deacons of the church and has been a deacon of their church and others for over 70 years!

I think you are right, Mr. Raymond…you “turned out alright.”

Scarlett Teel is a community correspondent. Look for the next installment of her column in a future edition of The Clanton Advertiser.