The Verbena Red Devils varsity boys and girls each picked up area wins on Thursday night over the Holtville Bulldogs with the girls winning 42-29 and the boys grabbing a 64-58 victory. 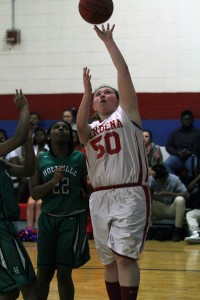 Monica Bauch and Candice Williams added baskets for the Red Devils to start the second quarter, and a basket from White along with a free throw and a three for the Bulldogs made the score 14-8 in favor of the home team.

White added more for Verbena, but a 4-0 run for Holtville to close out the half cut the Red Devils’ lead to three, 17-14.

Three-point shooting was the theme to start the third quarter, as two from Makayla Mims along with one from White aided an 11-0 run by Verbena.

Just four points from the Bulldogs gave Verbena a 36-18 lead after three periods of play.

A 6-0 run by Holtville to start the fourth cut the Verbena lead to 12, but that was the closest the Bulldogs could get as baskets from Williams and Mims secured a Red Devils win.

In boys action, a free throw and a basket by Juwan Tyus gave the Red Devils an early 3-0 lead, but the lead did not last long as the Bulldogs tied the game at four.

Tyus again gave Verbena the lead with a basket, and a three from Raymond Bulger extended the lead to five.

Brant Evans hit a three-pointer to bring the game to 9-all, but Anthony Miller broke the tie with a three for Verbena that started a 7-0 run. Holtville ended the first period on a 6-2 run of their own to cut their deficit to three, 18-15 at the end of the first quarter.

Hakeem Underwood stretched the Red Devils’ lead early in the second period, and moments later Bulger pushed it to five points, 24-19. Sagers added a basket for the Bulldogs to cut the lead to three, but baskets from Parker and Tyus, along with a three from Tristan Short, gave Verbena a 32-26 lead at the half. 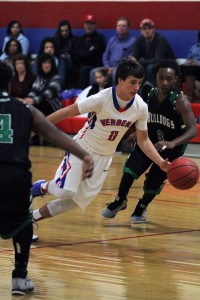 Tristan Short looks to dribble out of trouble, as Holtville defenders cave in around him during Thursday’s area opener.

The Bulldogs cut the Red Devils lead to two to start the third period, but Parker and Tyus again extended the Verbena lead to seven.

Holtville battled back to draw to within three, but Short single-handedly led a 9-2 Verbena run to give the Red Devils a 46-36 lead at the end of the third.

Short started things off for Verbena in the fourth with a basket, and after a basket from Jacob Cleckler, added another three-pointer. Cleckler followed with a three of his own that gave Verbena 56-40 lead.

Brant Evans answered with a three for the Bulldogs that started a 9-0 run to make the score 56-49.

Tyus ended the run with another three for Verbena and a basket from Parker gave the Red Devils a 61-49 lead with 1:43 to play.

A basket from Sagers ignited a 7-0 run by the Bulldogs to cut the Verbena lead to four, but it was be to little, to late as the Red Devils held on for the win.

Short led the Red Devils with 17 points, including 4-of-5 from three-point range and three rebounds.