The Jemison Panthers struggled to get out of the gate on Tuesday night against the Calera Eagles but were able to come away with 61-58 home victory over the Eagles on Tuesday.

The Panthers varsity boys got off to a slow start during the first period, shooting just two-of-seven from the field.

The Eagles, meanwhile, jumped out to an early 8-0 lead as nearly five and a half minutes went by before Ryan Thompson put the Panthers on the board with one basket from the free-throw line.

James Leachman and Kristopher Harris added two more baskets for the Panthers, but the Eagles led 10-5 after the first period of play.

Three straight buckets from Thompson and a basket from Tremon Bryant got the Panthers back in the game with the score all tied up at 10. 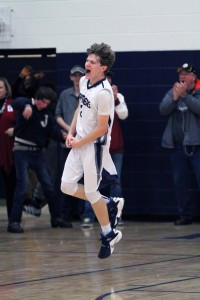 Jemison’s Wes McGehee shows his emotion after sinking a three-pointer in the final seconds to seal the victory over Calera on Tuesday. (Photo by Brandon Sumrall / Special)

However, a basket from Yatil Grant started a 7-0 Eagles run to make the score 17-10 at the 5-minute mark.

With the Panthers trailing by seven, four points from Thompson and a basket from Bryant pulled Jemison to within one.

A foul on James Leachman resulted in two free throws that found the bottom of the net to give the Panthers their first lead of the game.

The lead swapped between the two teams multiple times during the closing minutes of the first half, but a three from William Johns sent Jemison to the break with a one-point, 31-30 lead.

Thompson made the Panther lead three to start the third period but was quickly answered by a basket from Grant.

Another Grant basket gave the Eagles a one-point lead and set the tone as the teams once again swap the lead on multiple occasions.

Both teams would claim the lead by one through the one-minute mark of the period when JB Brown would make the Eagles lead five with back-to-back baskets.

Leachman added a basket for the Panthers with 23 seconds left to play in the period to take the game into the fourth quarter with Calera leading 47-44.

Thompson again got things started for Jemison in the fourth, and with a free throw from Mathew Ramsey the game was all tied at 47.

With Jemison holding on to a one point lead, Brown hit a three point basket for Calera to put the Eagles up by two with 2:05 to play.

Two points from the charity stripe Wes McGehee knotted the game at 58 with 45 seconds to play.

Brown missed on a three-pointer for the Eagles and with a rebound by Mason Jones, Coach Stacy McGehee called a time out to plan the Panthers possession through the final seconds.

With the clock ticking down and Bryant fighting off defenders at the top of the key, McGehee spotted up from three-point range and while fielding the pass from Bryant knocked down the clutch three-pointer with just two ticks left on the clock.

The Eagles inbound pass would bounce off a couple of Panther defenders to kill the clock and give Jemison a big regional victory.

McGehee led the Panthers with 18 points, four rebounds, and a steal.

Grant lead the Eagles with a double-double on 17 points, 19 rebounds, one steal, and one block.

By Brandon Sumrall | Special to the Advertiser Thanks to multiple points in transition behind a smothering defense, the Calera... read more