Clanton Police Department is investigating recent thefts, in separate incidents, of cigarettes and an 18-wheeler.

Police are seeking the public’s help in both burglaries. 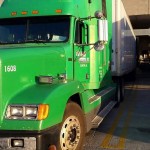 Big rig: Police are looking for leads in the case of a green 2004 Freightliner being stolen recently from a business off Highway 145 in Clanton. (Contributed)

The commercial motor vehicle, which was green with the text “Top Shelf Logistics” on both doors, is valued at about $25,000.

The vehicle was parked at the business while the driver, a local resident, was home for the holidays.

A load of lumber was unhooked from the vehicle before it was stolen.

Surveillance video shows a white dually in the area of the business prior to the theft.

The video can be seen on CPD’s Facebook page.

Anyone with information about the incident should contact Sgt. Cameron Bates at (205) 755-1994 Ext. 315 or cameron.bates@clantonpd.org.

Clanton Police are also investigating a theft at Murphy USA, located at Clanton Walmart, at about 2:48 a.m. on Monday.

In a surveillance video posted to the CPD Facebook page, a white sedan (thought to be a 2004 Nissan Sentra) circles the fuel station and then is parked next to the convenience store.

As seen on the video, two subjects wearing camouflage exit the vehicle, grab a large trash can from the trunk and throw a large rock through a window, gaining entry to the store.

Once inside, the subjects stole about $5,000 worth of cigarettes in cartons, dumping them into the trash can they brought with them.

A third subject, the driver, remained in the vehicle during the theft.

Anyone with information about this incident should contact the CPD Detective Division or Cpl. Tera Easterling at (205) 755-1194.

The preliminary hearing for a 33-year-old Verbena man facing charges of manslaughter from a wreck that happened Christmas Day 2015... read more