On Jan. 17, Drake Jones will receive the honorable and rare honor of Eagle Scout. Jones is a senior at Chilton County High School and a member of Troop No. 57. In earning his Eagle Scout rank, Jones was required to complete an Eagle project approved by a scouting committee. 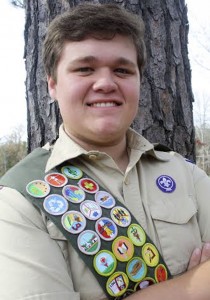 “The mosquito population in Alabama is really bad. We are always getting eaten up by mosquitos,” Jones said about why he chose the project. “I began doing research and learned that one bat can eat up to 1,200 mosquitos an hour.”

This revelation inspired Jones to further examine the bat population. During the research process, Jones learned of a disease known as white-nose syndrome that is killing a high number of bats. “White-nose syndrome is a fungus that grows in caves and causes the bats to come out of hibernation early,” Jones said. “They use all of their food storage early and then end up starving to death. This disease has killed millions of bats, causing concern for extinction.”

Armed with this knowledge, Jones decided to build a safe haven for the bats, while also allowing for better mosquito control.

Jones decided to place the bat houses in areas that had high populations of mosquitos. Three houses were placed at Lake Mitchell Marina, one at Grace’s Marina, one at Lake Mitchell Mini Mart, three at area churches and a few near his grandparents’ home. He maintains the bat houses by checking on them periodically to ensure they are still in place and that limbs are not covering them. Jones also reports that a couple of his houses have already found success, being inhabited by bats. 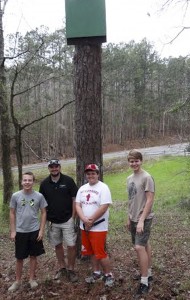 While he has enjoyed working on his Eagle project over the last year and a half, Jones shared that one of the most challenging, yet exciting parts was the actual placement of the bat houses. “I’m scared of heights, and we had to place the houses 12 feet off the ground,” Jones said. “Some of the other boy scouts and I took turns hanging them. It was fun.”

Jones has been a member of the scouts since first grade and has earned 31 merit badges, along with two Eagle Palms. He has participated in many service projects, making significant contributions to the community. He has displayed admirable qualities of dedication, perseverance and leadership throughout his time as a Boy Scout and will continue to uphold the values as an Eagle Scout.

Jones will receive his Eagle Scout award in a special ceremony held at Sunshine Assembly of God on Jan. 17 at 2 p.m.

By Leisl Lemire | Special to the Advertiser If you have ever been to Washington, D.C. and put your fingers... read more