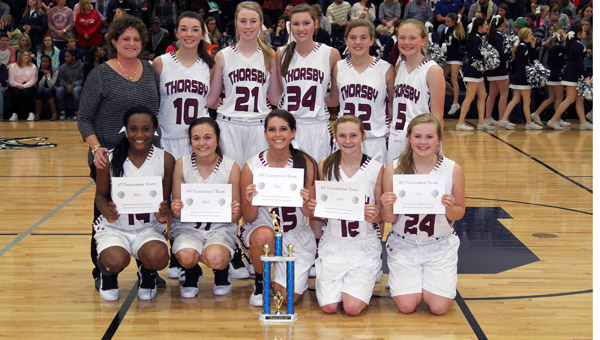 The Thorsby girls basketball team poses with the county tournament trophy after defeating Isabella in the final game. (Photo by Brandon Sumrall / Special)

It was a matchup of the top two seeds in the girls’ portion of the tournament and the second consecutive county title won by Thorsby.

“We’re just trying to take it one step at a time,” Isabella head coach Jared Day said. “We played hard, but tonight Thorsby was just a better team.”

Both teams took a while to get comfortable with the ball in their hands at the start of the game, as Thorsby grabbed an 11-7 lead at the end of the first quarter.

Caley Booth was all over the court defensively for Isabella and her active hands were able to force some steals to open the second quarter.

Synia Chattman took advantage with a fast break layup that gave Isabella a 12-11 lead, its first of the game.

Carmelina Fjeldstad rattled home a three-pointer, while Lilly Barnett quickly followed it up with a long-range shot of her own from the left corner.

The game picked up its pace in the second half, but Thorsby continued to lead 37-32 heading into the final quarter.

“The county tournament has brought the best out of me,” Thorsby senior center Sabrina Ellison said. “We normally have a couple of our starters foul out, but this game we were really able to remain calm.”

The Mustangs came out firing with a layup by Alexis Owens and a jumper by Sophia Underwood cut the deficit to one point.

“I thought that we played with a lot more confidence, because the last few years we seemed to let the crowd get to us,” Day said. “We pretty much blocked all that out this year.”

However, senior center Sabrina Ellison began to enforce her will on the game both in the post and in the rebounding battle. She finished the contest with 14 points and a team-high five rebounds.

“We talked before the game about this being her last year, and she really stepped up tonight,” Thorsby head coach Leighsa Robinson said. “She offered a different presence down low which opened up our offense.”

A Chattman layup shrunk the Rebels’ lead 43-41 with 4:26 left to play, but Barnett responded yet again with a three-pointer and two free throws on back-to-back offensive possessions to help seal the outcome.

“It was a rough style of game, but we expected that because it’s a rivalry game for both schools,” Robinson said. “It’s a good win heading into the second half of our season.”

Thorsby’s team slogan for this season has been “one heart beat,” and that is the way that they played throughout the county tournament.

Chattman finished with 14 points and Hailey Underwood tallied eight points, six of which came from the free throw line.