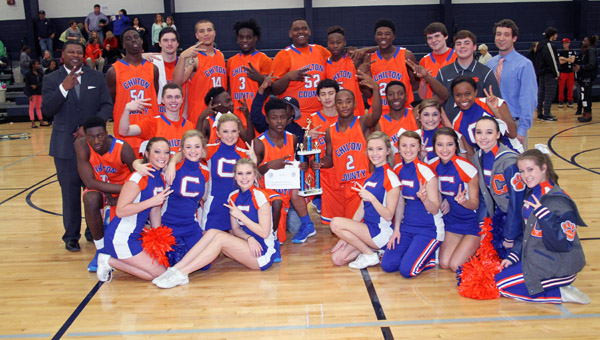 The CCHS boys basketball team poses with the trophy after a hard fought battle against rival Jemison in the county title game. (Photo by Brandon Sumrall / Special)

Chilton County High School repeated as county champions after outlasting rival Jemison in 62-56 in a back-and-forth affair on Saturday in the final game of the Chilton County Basketball Tournament.

With the win, CCHS retains its bragging rights over the rest of the county for another year.

“We knew that we had the potential, and we just had to go out and earn it,” Chilton County point guard Donte Davis said. “All the hard work means something to us, and that showed tonight.”

The game was full of twists and turns, with both teams going on its own scoring runs.

The Tigers opened the game with hot shooting and as a result, jumped out to an early 19-9 after one quarter of play.

However, Jemison heated up in the second quarter thanks to an offensive spark provided by Will Johns who scored seven straight points for the Panthers.

“We thought that we were in good shape,” Jemison head coach Stacy McGehee said. “The talk after the first quarter was that we weren’t finishing strong around the rim.”

Wes McGehee drained a three-pointer as time expired on the first half, and despite trialing the entire time Jemison went into halftime with a 32-31 lead over Chilton County.

“I didn’t have to get the kids up for this game, because they knew what was at stake,” McGehee said. “It was all about keeping our composure.”

The third quarter was extremely defensive, as points proved hard to come by for both teams. Chilton County clung to a 40- 37 lead heading into the fourth quarter.

“We just had to focus and do what we do well,” Chilton County head coach Deon Timmons said. “We had to stop making bad passes and missing free throws. That was the difference down the stretch.”

Johns began the final quarter with a three-pointer that tied the game at 40-all, but it was short-lived as Mondez Jones and the rest of the Tigers’ big men went to work on the glass.

Jaquaries Martin and Cade Hatch displayed relentless effort on the boards and allowed Chilton County to overwhelm Jemison in the rebounding battle.

“The credit goes to Chilton County for how they handled the boards,” McGehee said. “That was just them wanting it more.”

Martin and Hatch finished the game with 16 rebounds apiece. Hatch would have a double-double with a team-high 14 points while Martin came up just shy with nine points on the night.

Jemison continued to chase the lead, as CCHS eventually clinched the victory at the free throw line.

“We are steadily progressing,” Davis said. “We’re finally starting to click and we can’t wait to see what the rest of the season brings.”

Johns led all scorers in the game with 20 points and Ryan Thompson added eight points to aid the Panthers.

The crowd was electric on Saturday night, and an example of the passion for the game of basketball that is often overlooked in Chilton County.

“The atmosphere was great, and it would be a huge advantage to get that enthusiasm all season long,” McGehee said. “Not just for us, but for all the schools in the county.”

The B-team championship began the night’s festivities with Chilton County High School pulling away late for a 58-29 victory over Maplesville.

The Tigers finished the game with three players in double figures scoring, while Reshaun Davis led the way with a double-double of 10 points and 11 rebounds.

“The first group is mostly all sophomores, and the second group is freshman,” Chilton County B-team head coach Clint Pitchford said. “When they scrimmage together in practice, it’s a nail biter. Having that depth was really helpful.”

The Thorsby girls basketball team poses with the county tournament trophy after defeating Isabella in the final game. (Photo by... read more