“This isn’t a one-man show,” Thorsby head coach Leighsa Robinson said. “When we’re out there on the floor, we play as a team, and that’s the one thing that I am most proud of with this team. Our leadership filters on down.”

The Tigers’ post presence was diminished throughout the first half, as Kaley Lucas and Lexis Blackman were on the bench for large portions due to having committed early fouls. 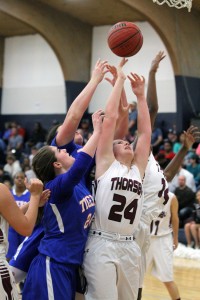 Salena Stoneback of CCHS (left) and Lauren Wyatt of Thorsby fight for a rebound in a group of players. (Photo by Brandon Sumrall / Special)

Thorsby’s offense took a while to find its own rhythm, but fortunately for the Rebels Adi Argent was feeling her stroke from the game’s opening tip.

“Adi was hot in the first quarter and really carried us,” Robinson said. “We have a certain tempo that we like to run, and I thought we did that.”

She scored Thorsby’s first six points of game and had already tallied nine points by the end of the first quarter.

The second quarter was sluggish offensively for Chilton County, as the Tigers turned the ball over several straight possessions, and scored its first points with 2:21 left before the half on a layup by Lucas.

The Rebels led 23-10 at the half, as the defense began to frustrate Chilton County’s offensive game plan.

“This team wants to practice and do anything it can to get better,” Robinson said. “This is a fun group of ladies to coach, because they challenge themselves.”

Argent continued to be a catalyst in a variety of ways. She finished the game with 15 points to accompany seven steals and six assists.

“We work well together, and it just flows out there,” Thorsby guard Adi Argent said. “We don’t have to worry about a lot because if one person is not doing well, we’ll pick up the slack for each other.”

Throughout the second half, Thorsby’s defensive turnovers routinely transitioned into points at the opposite end of the court.

“We’re really aggressive on defense, and it all comes down to our communication,” Argent said.

Kerri Robinson led Thorsby with 16 points, while Blackman led Chilton County with 15 points, as she turned it on late with 11 of those coming in fourth quarter. Lucas also finished in double-figures scoring with 10 points for the Tigers.

Thorsby is scheduled to face the winner of Isabella and Jemison on Saturday. The Rebels will seek to defend their title after a victory in the championship game last year.

“It definitely feels like everybody is after us since we won it last year,” Argent said. “If we just play our game, we should be fine.”

Check The Clanton Advertiser and ClantonAdvertiser.com for continued updates from the tournament.