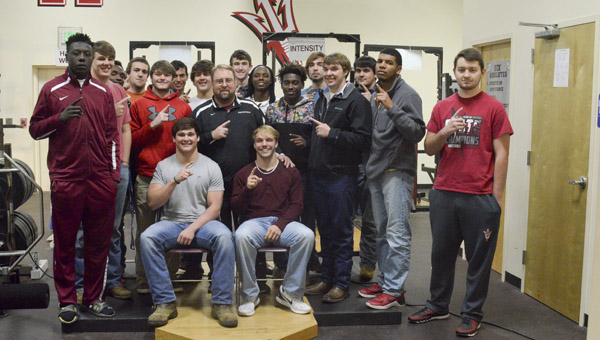 Maplesville head coach Brent Hubbert (center), Will Harrison (left) and Cole Spencer demonstrate with the rest of the senior class that they are No. 1 in the state. (Photo by Anthony Richards / Advertiser)

Sixteen players make up the Maplesville football’s senior class. During the past three years, that group has enjoyed back-to-back Class 1A state titles, three straight championship appearances and endured only two loses.

“We’re the biggest class to ever come through Maplesville, so there was always a little bit of pressure on our shoulders,” Maplesville linebacker Will Harrison said. “It has definitely been a dream come true.”

There are so many dynamic players on a roster loaded with talent that has contributed its share of clutch plays during its recent title runs.

Harrison was named the Defensive Player of the Year by the The Clanton Advertiser. He was one of many leaders on the defensive side of the ball, and became a fan-favorite with his devastating hits.

“All these guys are physical, and the crowd thrives on big hits and tackles for a loss,” Harrison said. “As a defensive guy, it really makes you smile.”

He learned how to be a leader by experiencing the agony of defeat as sophomores during a 38-18 loss to Pickens County in the 2013 championship game.

“The older guys on the 2013 team that got beat helped set the tone for how to be a leader at Maplesville High School,” Harrison said. “I’ve just passed on what they taught me.”

On the other side of the ball, Cole Spencer was chosen as the Offensive Player of the Year by The Clanton Advertiser.

Often times, quarterbacks are judged more than any other position by wins and loses. If that is the case, Spencer should be at the top of the list because he won at a rapid clip.

“Any player is going to have difficult days during practice, but my teammates have really helped rise me above that,” Spencer said. “Every year, I feel that I’ve become more mature.”

Spencer understands the legacy that he and the rest of the 2016 senior class had established within the program. It is something he had always aspired toward since he first learned about the game of football.

“When I was in elementary school, I remember getting everybody’s autograph when they came through for the Devil Walk,” Spencer said. “From the little kids to the adults, everybody knows your name and what you’ve done.”

As the games slowly counted down during the season, Harrison could tell that his life was about to experience a major change.

“It wasn’t until late in the year when we started realizing that it may be one of the last times,” Harrison said. “After the Georgiana game, we began thinking that we only had two more times to put on this helmet.”

The 2016 senior class will always have a special place in head coach Brent Hubbert’s memory and share a common place in the hearts of the Maplesville community.

“The good thing about being at a small school is that we see them when they come in kindergarten, and then we get to watch them grow,” Hubbert said. “It is an honor to see them smile and have success.”

Chilton County High School handed Verbena its first loss of the season with a 77-64 victory in the semifinals of... read more