Chilton County High School handed Verbena its first loss of the season with a 77-64 victory in the semifinals of the Chilton County Basketball Tournament on Thursday at Jemison High School. 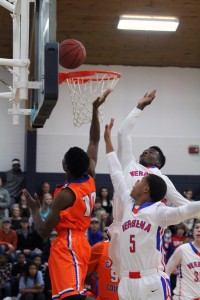 Verbena’s Dorrian Parker (No. 5) and Hakeem Underwood attempt to block a shot, but not before James Davis of CCHS (left) establishes position under the basket. (Photo by Brandon Sumrall / Special)

“This bunch really wanted [the win],” Verbena head coach Mark Cleckler said. “I just hope we rebound from it, and don’t drop the next two or three like last year. We’re going to try to put this behind us and get ready for area play (next week).”

The win secured a spot for the Tigers in the title game that is to be played Saturday night. CCHS will be looking to defend its crown after winning the county tournament a year ago.

The game began with a frantic pace, as Verbena looked to push the tempo. Both teams traded shots with several long-range bombs that ignited cheers by both fan bases.

“That’s pretty much our format as well, and I thought it worked into our favor,” Chilton County head coach Deon Timmons said.

JeQuaries Martin provided energy off the bench with a basket and a steal on consecutive plays to help fuel an11-3 scoring run for Chilton County.

“All the guys had a chance to contribute, and I received some valuable minutes from my bench,” Timmons said. “We’ve increased our depth, and it’s attributed to the guys working hard to learn our system.”

However, Anthony Miller banked in a three-pointer as time expired, as Verbena trailed 23-16 at the end of the first quarter.

The Red Devils were able to keep the deficit within reach throughout much of the second quarter, as Chilton County led 38-30 going into the halftime break.

Miller drilled another shot from beyond the arc to open the third quarter and cut the margin to five points.

“This is the first physical team that has really pressed us,” Cleckler said. “I believe that if my bench would have been a little deeper, we could have given them a fit.”

That was the closest the Red Devils came to grabbing the lead, as Chilton County’s playmakers began to influence the game.

The trio of Cade Hatch, Tolliver Gilliland and Donte Davis combined for 16 of the Tigers’ 23 third quarter points. Chilton County stretched the lead as a result.

By the time the final quarter rolled around, fatigue began to set in for Verbena and there did not appear to be enough left in the tank for a comeback.

“Our bench is just not as deep as a 5A,” Cleckler said. “Our starting five stayed out there as long as they could, but you could tell it took a toll on us by the fourth quarter. We knew that coming in, but we still felt like we had a fighting chance.”

Hatch led the Tigers with 23 points, while Gilliland added 14 points on the night.

Despite the loss, Juwan Tyus finished with a mammoth scoring night for Verbena, as he racked up a game-high 34 points.

Jacob Cleckler also finished in double-figures for Verbena with 12 points on four three-pointers.

Chilton County is scheduled to face the winner of Maplesville and Jemison for the county title on Saturday. Check The Clanton Advertiser and ClantonAdvertiser.com for continued updates from the tournament.